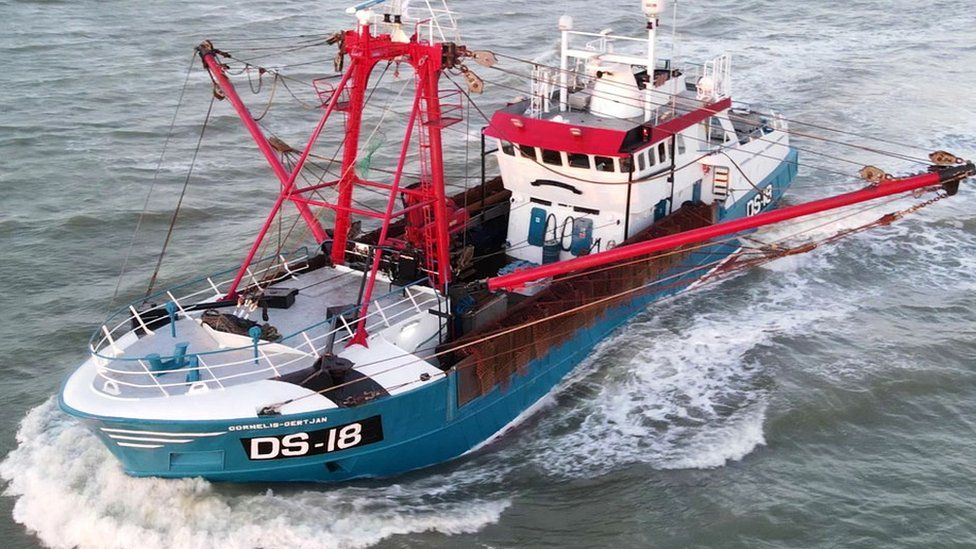 The Cornelis Gert Jan, which is owned by MacDuff Shellfish of Scotland, was detained when fishing in French waters Follow @Graphicgh

A British trawler has been seized by France and another has been fined, amid an escalating row over post-Brexit fishing rights.

She said the first did not comply right away and the second was not allowed to fish in French waters so was detained.

No 10 said it was watching events closely and wanted France and EU talks but was ready to respond appropriately.

Earlier, the environment secretary said he was "urgently" investigating the situation in relation to the detained vessel - which has been named as the Cornelis Gert Jan.

Responding to an Urgent Commons Question from the SNP, George Eustice said the boat was on a list provided by the Marine Management Organisation (MMO) initially provided to the European Union.

He insisted the European Union did grant a licence to the vessel but it was "unclear" why, according to reports, it was subsequently withdrawn from the list.

Mr Eustice said he was awaiting further details from Marine Scotland and was expecting a response in the "next hour or so".

Deidre Brock, the SNP's environment spokesperson, said it was not good enough that the environment secretary had so little information.

MacDuff Shellfish of Scotland, which owns the Cornelis, said the crew of its vessel were "in good spirits" after it was "ordered into a French port while legally fishing for scallop in French waters".

The firm's Andrew Brown said the crew would remain on board the vessel until its release, while the captain had left the boat to be interviewed by the French authorities and had been given legal representation.

He said Macduff's "fishing activity [was] entirely legal" and it appeared the Cornelis, based at Shoreham, in West Sussex, had been "caught up" in the ongoing UK-France post-Brexit fishing row.

Mr Brown warned that without "a speedy resolution", the vessel's catch could be confiscated by the French authorities, and called on the UK government to "defend the rights of the UK fishing fleet".

The firm will "vigorously defend" itself any claims, but its "priority concern" was for the welfare of the vessel's crew.

Ms Girardin had said on Twitter that the trawler was found to be fishing in the Bay of Seine without the proper licences.

The minister said checks on the British vessels were standard during the scallop fishing season.

But she added they had also been undertaken against "the backdrop of the tightening of controls in the Channel, in the context of discussions on licenses with the United Kingdom and the European Commission".

France had warned that it would block British boats from some ports next week - as well as tightening checks on UK boats and trucks - if a post-Brexit dispute over fishing licences was not resolved by 2 November.

On Wednesday evening, it issued its ultimatum, saying it would begin to impose "targeted measures" from next Tuesday, including preventing British fishing boats from disembarking at ports and more checks on UK goods.

France has also warned it could cut electricity supplies to Jersey, a British Crown dependency, as it previously threatened in May.

Mr Eustice said threats of sanctions made by France were "disappointing and disproportionate" and appeared to breach the post-Brexit deal and international law.

He appealed to MPs to "remain calm", saying that UK would not get into a "retaliatory tit-for-tat" but warned of a possible "appropriate and calibrated response" if France carried out its threats.

Mr Eustice rejected French claims that the process for applying for fishing licences had been slow and difficult, saying officials had granted 98% of post-Brexit licence applications from European boats to fish in UK waters.

He said more were expected to be granted following "constructive" talks with the European Commission and that he had told the French and the Commission that the UK's "door remains ever open".

French politician and member of President Macron's En Marche party, Bruno Bonnell, told BBC Radio 4's World at One programme that French fishermen are "losing 25% of their business because of regulation".

He said "in the Brexit treaty we were not supposed to reach this point of tension" and disagreed with the licencing figures quoted by Mr Eustice, saying 200 licences had been granted.

Mr Bonnell argued French authorities "have ways to retaliate if you push too hard" and he "would not be surprised if by next week we see significant advances" in discussions.

The UK maintains the rejected applications which sparked the row did not have enough supporting evidence to show they had a history of fishing in Britain's or Jersey's waters.

A meeting with officials from France, Jersey, the UK and European Commission, on Wednesday led to 162 French boats being given licences to fish in Jersey's waters from Friday.

The government of Jersey said it was "extremely disappointed" by the latest threats of sanctions by France. French trawlers previously protested outside the port of St Helier on the island.

Labour's shadow environment secretary Luke Pollard said the tensions were a result of the government losing control of negotiations and there was real concern "the botched Brexit deal" was going to lead to more clashes.