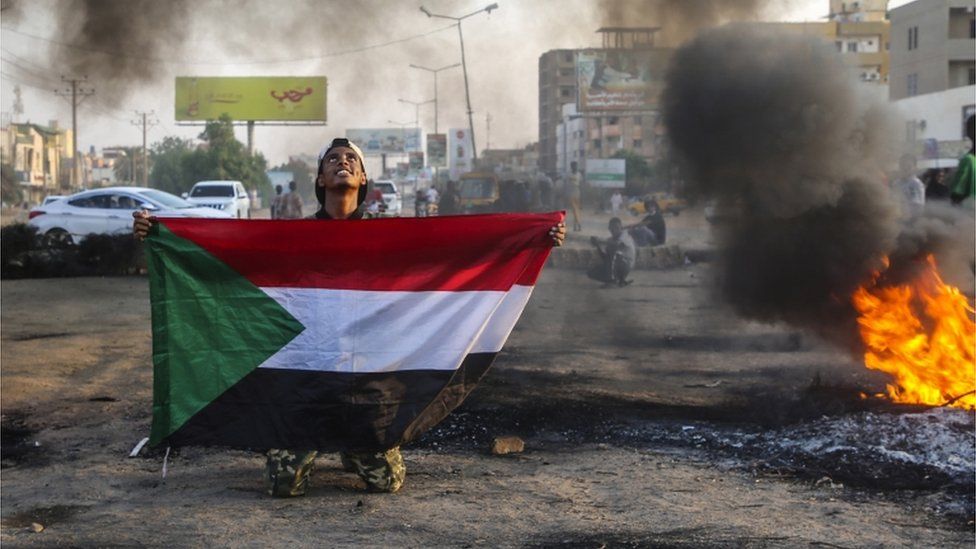 Demonstrations against the coup are continuing

The World Bank has suspended its aid to Sudan, after the military there staged a coup against the civilian government.

The African Union (AU) has also suspended Sudan from the bloc over the "unconstitutional" seizure of power. The US has frozen $700m (£508m) in aid.

Sudan's civilian and military leaders had been in a fragile power-sharing agreement for the past two years.

Gen Burhan was in charge of the power-sharing agreement, and has said the coup was needed to avoid "civil war". He has insisted that Sudan is still moving towards democracy and elections in 2023 - but his reasoning and the sudden takeover have been widely rejected.

The president of the World Bank, David Malpass, said in a statement: "I am greatly concerned by recent events in Sudan, and I fear the dramatic impact this can have on the country's social and economic recovery and development."

In March, Sudan was able to access $2bn in grants from the World Bank for the first time in nearly 30 years, after it finally cleared debt it owed. During a rare visit to the capital Khartoum, Mr Malpass said that the country was making some economic progress, after years of being in a deep crisis.

The AU tweeted that while it welcomed the release of the prime minister, who was detained on Monday, Sudan will remain suspended from its activities until the civilian government is reinstated.

Meanwhile, street protests have gone on for a third day, with at least 10 people killed after soldiers opened fire on crowds. Troops are reported to have been going house to house in Khartoum arresting local protest organisers.

Trade unions representing doctors and oil workers say they are joining the demonstrations, as are staff at the Sudanese Banking Association.

"We stand firmly against any military action and any form of dictatorship," the association's spokesman, Abdul Rashid Khalifa, told the BBC.

The agreement between civilian and military leaders was signed in 2019 after long-time ruler Omar al-Bashir was overthrown. The power-sharing was designed to steer Sudan towards democracy but has proven fragile with a number of previous coup attempts, the last just over a month ago.