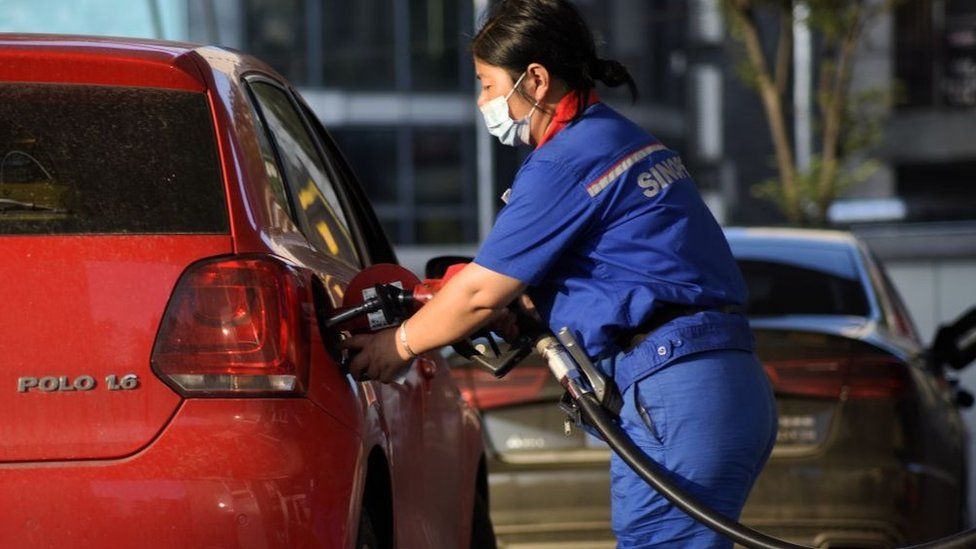 Petrol stations in many parts of China have begun rationing diesel amid rising costs and falling supplies.

Some truck drivers are having to wait entire days to refuel, according to posts on social media site Weibo.

China is currently in the midst of a massive power crunch, as coal and natural gas shortages have closed factories and left homes without power.

And this latest issue is only likely to contribute to an ongoing global supply chain crisis, say analysts.

"The current diesel shortages seem to be affecting long-distance transportation businesses which could include goods meant for markets outside of China," said Mattie Bekink, China Director at the Economist Intelligence Unit.

"Depending on the duration and intensity of this crunch, we could well see this contribute to the global supply chain challenges."

The global supply chain crisis has been largely driven by the Covid-19 pandemic, with demand surging as economies re-open.

In China, trucks are only being allowed to fill up 100 litres each - about 10% of their capacity, a truck dealer from Shijiazhuang city in Hebei province told Chinese business news service Caixin.

In other parts of the country, reports suggest rations are even tighter with drivers only allowed to buy up to 25 litres.

Meanwhile, in the city of Fuyang, about a seven-hour drive south of the key transportation hub of Shijiazhuang, Caixin reports petrol stations are limiting purchases or charging drivers surcharges of up to 300 yuan ($47, £34) to fill up their tanks.

"After going to a few [petrol] stations, there is no more diesel, and prices will continue to rise, and large trucks running logistics will not be able to refuel," one Weibo user wrote.

Another also bemoaned the impact on inflation and deliveries.

"Do you get the feeling that food has become more expensive and the express delivery is slower? It would be better to buy less on 11/11," referring to Alibaba's Single's Day, typically one of the biggest days of the year in China's shopping calendar.

Aidan Yao, a senior emerging Asia economist at AXA Investment Managers, told the BBC while the market is well aware of China's coal shortage, the "diesel problem is new".

"All fossil fuels have seen a price renaissance lately as the underinvestment in these fuel sources has created a shortfall of supply at a time when demand is surging," he said.

"Oil, gas, coal prices have all moved in tandem and are through the roof."

Oil prices have hit their highest levels since 2014 in recent weeks, causing fuel crises in places such as Europe and the UK.

Part of this has been driven by coal and natural gas shortages in countries like China and India, which analysts predict will see users switch to oil for power generation and heating.

Such demand could boost overall crude consumption by more than half a million barrels of oil a day.

"This is merely the latest manifestation of shortages impacting China," Jeremy Stevens, Chief China Economist at Standard Bank told the BBC from Beijing.

He said companies are already turning to diesel-fuelled generators to keep their factories open during the power crunch.

"The heart of the matter is the energy crisis," he said.

Both Mr Yao and Mr Stevens warned that these current power crises show the dangers of switching to renewables too quickly.

"The path to net zero is treacherous and the journey needs to be planned carefully," Mr Yao said.