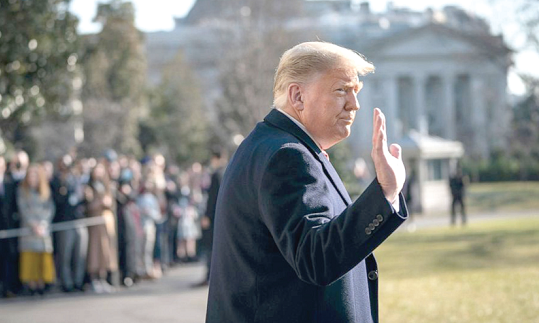 The old order changeth yielding place to new as President Donald Trump spend his last day in office as the 45th President of the United States today, while President-elect Joe Biden prepares to swear the oath as the 46th President.

Donald Trump became the first President in US history to be impeached twice, after being charged with "incitement of insurrection" over the deadly storming of Congress by his supporters.

The last vestiges of Trump’s presidency will be swept away on Wednesday, January 20, 2021 as the Bidens move into the White House today. Desks will have been cleared out, rooms scrubbed clean and the President's aides will be replaced by a new team of political appointees.

The change is part of the massive transformation that a new presidency brings to the heart of government.

The cleaning out of West Wing offices and the transition between Presidents is part of a tradition that dates back to centuries. It's a process that has not always been imbued with warmth.

This year, however, the transition stands out for its acrimony. The process usually starts straight after the election but it started weeks late after Trump refused to accept the result. And the President has said he will not attend the inauguration. Most likely, he will instead travel to his Mar-a-Lago club in Florida.

Still, the handover is taking place, just as it has in the past. "The system is holding," says Sean Wilentz, a professor of American history at the Princeton University. "It's very rocky, it's very bumpy but nevertheless, the transition is going to occur."

Even in the best of times, the logistics of a transition are daunting, involving the transfer of knowledge and employees on a massive scale.

The over 4,000 political appointees hired by the Trump administration who will lose their jobs and be replaced by individuals hired by Mr Biden.

Furniture in the White House such as the Resolute Desk in the Oval Office, most of the artwork, china and other objects, belong to the government and will remain on the premises.

But other items such as photos of the President that hang in the hallway will be taken down as the White House is transformed for its new occupants.

Staffers are already moving some items out of the building but Trumps' personal belongings such as clothes, jewellery and other items will be moved to their new residence most likely at the Mar-a-Lago in Florida.

Incoming first families usually do some redecoration. Within days of arriving at the White House, Mr Trump had chosen a portrait of populist President Andrew Jackson for the Oval Office. He also replaced the drapes, couches and a rug in the office with ones that were gold-coloured.

On inauguration day, Vice-President Pence and his wife will also make way for Kamala Harris and her husband, Doug Emhoff. They will be settling into their official residence, a 19th Century residence on the Naval Observatory grounds, a couple of miles from the White House.

President Trump is set to depart Washington early Wednesday morning ahead of President-elect Joe Biden’s swearing-in, making him the first President in over 150 years to skip the inauguration of his successor in a ceremonial transfer of power.