Biden sworn in as new US President 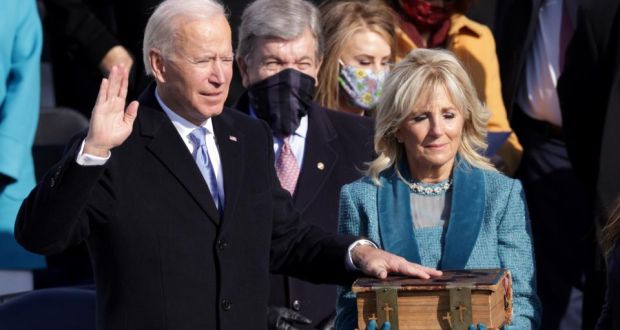 President Biden: "Democracy is fragile, and at this hour, my friends, democracy has prevailed"
30.5k Shares

Joe Biden has been sworn in as the 46th US president, ending one of the most dramatic political transitions in American history.

"Democracy has prevailed," he said after taking the oath of office from Chief Justice John Roberts.

Donald Trump - who has not formally conceded the presidency to Mr Biden - snubbed the inauguration ceremony, in a departure from longstanding precedent.

The new president has announced a raft of measures reversing Trump policies.

Kamala Harris was sworn in as vice-president ahead of Mr. Biden. She is the first woman - and the first black and Asian-American person - to serve in a role, a heartbeat from the presidency.

The inauguration took place at the US Capitol. There is extra-tight security after the building was stormed by violent pro-Trump protesters in a deadly riot on 6 January.

Some 25,000 National Guards protected the ceremony, which missed the traditional hundreds of thousands of spectators because of the coronavirus pandemic.

How is inauguration day unfolding?
In his inaugural address, Mr Biden said it was a day of "history and hope".

"My whole soul is in putting America back together again," he added.

Highlighting a message of unity after the turbulent Trump years, he promised to be a president "for all Americans" - including those who voted against him.

Among those attending the ceremony were three of his predecessors: Barack Obama - under whom Mr Biden served for eight years as vice-president - Bill Clinton and George W Bush.

The inauguration ceremony included musical performances by Lady Gaga - who sang the national anthem - as well as Jennifer Lopez and Garth Brooks.

An evening concert at the Lincoln Memorial in the city will be hosted by Tom Hanks and include Bruce Springsteen, John Legend, Jon Bon Jovi, Justin Timberlake, and Demi Lovato.

Earlier on Wednesday Mr Biden, 78, attended Mass at a cathedral in Washington - along with four Roman Catholic congressional leaders, both Democrats and Republicans.

What is Trump doing?
Mr Trump was the first president not to attend his successor's inauguration since 1869.

In his farewell address at the base, he highlighted what he regarded as the successes of his presidency. "What we've done has been amazing by any standard," Mr Trump said.

The 74-year-old then left for his Mar-a-Lago golf club in Florida, where he arrived later in the morning.

In his last hours as president, Mr Trump granted clemency to more than 140 people, including his former adviser Steve Bannon, who had been facing fraud charges.