A newborn baby has been allegedly burned to death after reportedly left in a faulty incubator in a Chinese hospital.

Graphic pictures of the scorched 12-day old infant have been made public after being released on China's equivalent of Twitter.

The tiny lifeless child has been laid out, face down, on a white blanket on a table; the baby's back and little legs are a burned dark brown and red. His little feet look sooty and singed.

Hospital staff appear to be mulling around the table; some take photos of the tragic newborn.

The pictures are so graphic that all the online news sites that have accessed them from the Chinese social media site, Weibo, have blurred out the most burned areas.

Beijingcream.com reports the baby was placed in an incubator overnight as a precaution since the tiny tot had a cold, according to relatives. 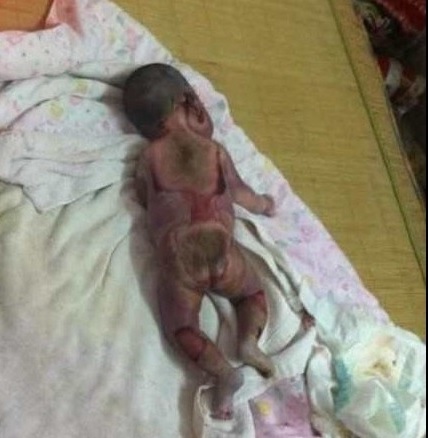 The news service says the child was left overnight in an incubator which had heat pads that were far too hot, 'searing the meat off his back'.

It describes the death as an apparent 'horrific accident'.

Hospital staff, including nurses from the ward, have refused to speak to the media.

Also, disturbingly, the Biejingcream.com reports that all surveillance footage from that night has apparently been deleted.

According to Chinese news site Guiyang News, translated by the Shanghaiist.com, the hospital is so far refusing to accept responsibility for the baby's death.

The alarming pictures are spreading across China and the rest of the world, after photos were posted on the country's social media site Sina Weibo, also known as Wibo.

The site is becoming increasingly popular in China, where internet pages are censored and blocked by the state. On Chinese New Year the site overtook Twitter for having the highest ever recorded number of posts per minute.