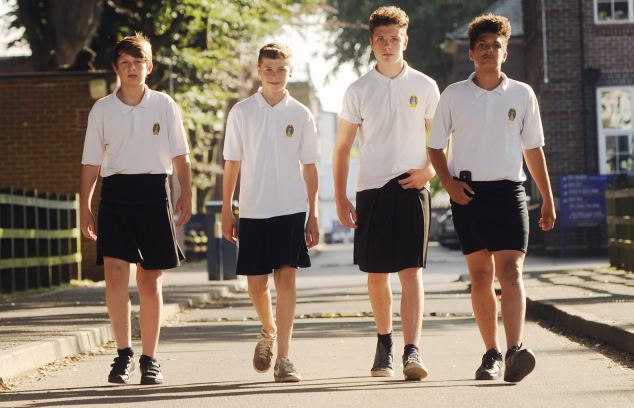 A head teacher got his knickers in a twist when a group of boys ditched their trousers for skirts to help beat the heat wave that is currently gripping the country.

The 17-strong group of Year 10 boys at Whitchurch High School in Cardiff raised eyebrows when they emerged from the lavatory in female attire and strode around the school demanding to be allowed to wear shorts.

But the uprising was short lived, and they were promptly marched to head teacher Huw Jones-Williams' office and firmly ordered to get their trousers back on.

Protester Tyrone Evelyn, 15, was among those involved and vowed to continue campaigning for a change.

He said: 'It’s just appropriate for the weather; we don’t want to be hot and bothered.

'Over the last few days I’ve had a few headaches and skin irritations because I’ve been too hot.

'Girls can wear skirts, so I don’t see why we can’t wear shorts. It’s a reasonable protest.'

Tyrone and his friends wore trousers to school with the skirts stowed in their bags after they suspected some teachers had got wind of their protest, which they planned on Facebook.

They then nipped into the loos and changed into the skirts, which they had borrowed from friends, before taking to the school corridors chanting, 'we want to wear shorts'.

The boys now plan to write to their student council in the hope the uniform will be changed for next summer.

Tyrone’s mother Andrea John, 51, said: 'It should be optional to wear three-quarter length shorts. It would cost exactly the same as if they wore trousers.'

But head teacher Huw Jones-Williams is sticking to his guns and has vowed to continue with the school's strict uniform policy, which permits girls to choose between skirts or trousers, but prevents boys from wearing shorts.

He said the school was carrying out risk assessments to ensure children were coping with the heat, which will involve visiting every classroom to find out how children are coping, and handing out bottles of water.

Although none of the boys was punished for their antics, Mr Jones-Williams refused to relax the rules without first holding a consultation.

Asked if Whitchurch could like other schools in Cardiff, allow boys to wear PE shorts in class when the weather was extremely hot, Mr Jones-Williams said: 'I can’t comment on what other schools are doing.'

He added the school would continue to enforce its 'strict uniform policy', but also 'monitor the weather conditions'.

Labour councillor for Whitchurch, Jonathan Evans - a governor at the school - admitted that when he was a youngster he led protests over having to wear school ties, but added it was important Mr Jones-Williams was able to make his own decisions over discipline issues.

The boys’ protest comes a month after train drivers in Sweden made international headlines by wearing skirts to work to protest against a policy that banned shorts.

Train Company Arriva has since capitulated and changed its policy to say all their drivers can wear trousers, shorts or skirts.