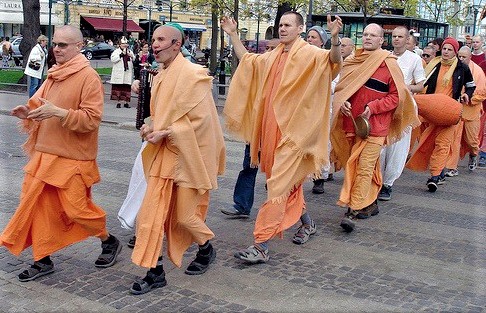 The funeral of my late housekeeper for the past 14 years, Prince, took place over the weekend in Kumasi and I must admit it was a rather emotional period for me as the reality finally hit home.

Of course, like the standard Kumasi lying in state, the tears were endless and the wailing was loud. The crowds on both Saturday and Sunday were quite considerable, perhaps a testament to the sort of person Prince was.

What the funeral lacked in terms of ‘kete’ drummers, it more than made up for in a brass band, fully sponsored by his friends.

And boy, did they put on a stellar ‘soloku’ dance routine deep into the night after formalities had come to an end on both days at 6pm!

Altogether, this was quite a mighty send-off.

Perhaps what stole the show on Saturday afternoon during the funeral was when a group of Hare Krishna adherents turned up in solidarity with Prince’s father, a fellow adherent.

After they had gone through the standard Kumasi funeral protocol of greeting (thankfully, nobody shakes hands at funerals these days, thanks to COVID-19), being seated and then being formally welcomed by a group of family members, they took centre stage and treated the crowd to some chants (“chant and be happy,” they said).

They included men and women, the old and the young, and they were quite enthusiastic in their dance moves. Eventually, Prince’s father joined them and the crowd appeared wowed, rewarding them with quite some applause.

I certainly was fascinated by the Hare Krishna performance, but beyond that I realised, on reflection later in the evening, that as someone who considers himself quite well-read and educated, I knew next to zero about Hare Krishna, or indeed Buddhism, Ba’hai, Eckankar, Shintoisim, or any of the other faiths that exist in Ghana, but which in other parts of the world are either the dominant faiths or attract considerable following.

A quick straw poll of some friends revealed that I was not the only one wallowing in ignorance, but in several ways I was not really surprised.

After all, in Ghana, growing up one almost soaked on a daily basis in Christianity or Islam, and so in many ways one grows up with little space for even seeking knowledge of other faiths just out of interest – almost as if one would be ‘corrupted’ if one dared ‘stray’ beyond the confines of one’s faith.

To that extent, there seems to be a determined shutdown particularly when it comes to the rather emotive subject of religion.

I can imagine many a devout Ghanaian Christian parent hitting the roof on seeing their teenage son or daughter reading up on any other faith.

Our education system does not help much either in broadening one’s religious horizons, and I believe the first time one is able to really delve into the whole gamut of religious faiths in our schools is at undergraduate level, with the University of Ghana offering undergraduate and postgraduate programmes in The Study of Religions.

I think a good mind always seeks to explore beyond the known and the comfort zones, whether it about religious faiths, cultures and so many other aspects of human life and endeavour.

Even in own country, there is so much to know and we must seek to pursue it, particularly through reading.

Curiosity is a good thing and we must encourage that in children, both in school and at home. There is absolutely no evidence that it killed the cat or any other animal for that matter.

Of course, there is such a wide variety of knowledge on every subject imaginable and it is not possible to know about every aspect of human life in detail. But at least it is important to allow the mind to graze, especially in an Internet age, where information is so readily available.

I once met a young university student, who told me, rather proudly, that beyond her sociology textbooks and her Bible, she was not interested in reading anything else.

I was as shocked as I was disappointed in her remark, which did manifest itself in our conversation. Some basic knowledge does spawn and lubricates intelligent conversation.

Even though I have known for the past few years that Prince’s father is a Hare Krishna adherent, we have only chatted briefly about his faith.

One of my neighbours is Buddhist, but we have never discussed it. I think it has been a matter of the usual shutdown.

Going forward I know what low-hanging fruit to go for to broaden my horizons a wee bit more.