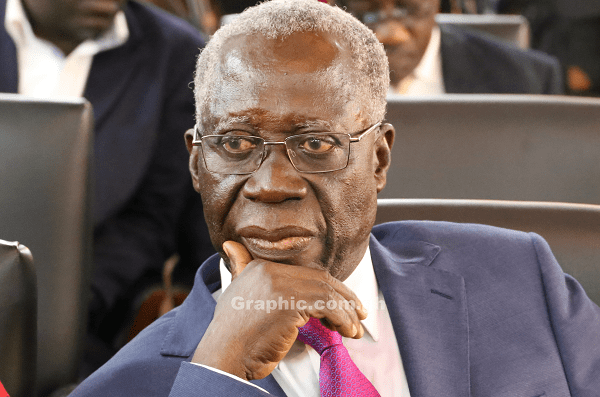 First, some good news. In what Roman Catholics will say, “mea culpa” (when they kneel before a priest to confess their sins), Senior Advisor to the President, Nana Yaw Osafo Maafo, has apologised to the people of Ghana.

“I concede that I erred,” he announced in an apology for ethnocentric comments he made in June 2022 during a secret meeting with New Patriotic Party (NPP) delegates in the Eastern Region.

The comments related to the roles of various ethnic groups in Ghana’s independence struggle.

In the apology published on social media, he concedes that “these comments caused offence and well deserved criticism.” (The criticism he is referring to was published a fortnight ago on this page written by Yours Truly).

Though some may insist that “what comes out of the kettle is what is in it,” Yours Truly is of the opinion that Osafo Maafo has done what many elderly Africans (he is 86) are not wont to do: go down on his knees before the people he has offended.

Like most people who read the offending statement, I was outraged as a nationalist. Today, on this same page, in the same spirit of nationalism, I call on fellow Ghanaians to extend to him a hand of reconciliation and lift him off his kneeling position.

Osafo Maafo has served his country well since 2000. As our elders say, only the servant who fetches water from the stream is the same from whose head the pitcher will fall down and break into unrecoverable pieces.

He is man who, as Finance Minister from 2001 to 2005, successfully transformed Ghana’s economy. It cannot be for nothing that in 2001 ‘The Banker’ magazine voted him “The Best Finance Minister in Africa”, the same year as he was named Finance Minister of the Year by the World Economic Forum, Davos.

The man in the street will never forget the Minister for Sports who took the Black Stars to the 2006 World Cup in Germany!

Now, to my topic for this week.

I am sure that like most Ghanaians, you dismissed as bunkum, the “revelation” by a certain prophet that President Akufo-Addo has been “tied” (spiritually).

We may not believe it (I don’t) but most Ghanaians know what it means to “tie” somebody.

Balderdash, yes, but honestly, fellow Ghanaians, is the Akufo-Addo regime not behaving in ways that make us think that somebody has lost the magic!

Is it not strange that a Roads Minister will order immediate closure of all toll booths when he has not thought through where the money will come from to pay the displaced attendants, most of them physically handicapped?

Are you not surprised that a government will allow a minister to be away in America from her post for upwards of one year and still be receiving salary!!!

How do I know about the salary? She said in a radio interview recently that “no-one has sacked me. I am coming right back to the ministry”.

Is it not strange that a government has behaved the way it has, in its latest dealing with the Ghana National Association of Teachers (GNAT), the National Association of Graduate Teachers (NAGRAT), the Concerned Teachers and the Teachers and the Educational Workers Union (TEWU), when it knows the history of the disruptive economic and politically fatal consequences of the combined force of educational workers in a fight that has the potential to involve the Trades Union Congress (TUC), nurses and Civil and Local Government Staff Association, Ghana (CLOGSAG)?

Must labour’s request for a Cost of Living Allowance (COLA), since February, be allowed to so degenerate when all it would have taken to avert it was a proactive engagement with labour?

And yet it is only this week, in the middle of the strike, that the Minister of Employment and Labour Relations is sitting down with them.

The NPP knows that never, before 2022, has its World Bank boiled like it is doing now when a constituency office is painted over with NDC colours and emblems.

For Ashantis to openly question (on TV) whether they are still regarded as part of Ghana is really hitting rock-bottom in Fourth Republic politics.

The NPP seems to have forgotten what happened to National Democratic Congress (NDC), when Volta Region apathetically failed to vote in their numbers in 2016: they wouldn’t vote for NPP, but they felt so let down that they neither voted for NDC.

What has gone wrong with Akufo-Addo? Who are his advisers? My suspicion is that he is surrounded by persons whose main strength is winning arguments and debates.

Because of these inner-inner circle commanders, he, the President, may not only be losing friends, but may also squander the goodwill of the millions that swept him into power in 2016.

The writer is Executive Director,
Centre for Communication and Culture.
E-mail: This email address is being protected from spambots. You need JavaScript enabled to view it.