A view of the Wassa Akropong town Follow @Graphicgh

The Western Region, one of the most resource endowed regions in the country, has attracted many investors into the mining and extractive industry.

This has given rise to small-scale mining as well as illegal mining, which has become known as ‘galamsey’ in the region.

Contributing to the recent spate of galamsey is the “support” that came from the Chinese, who have come with huge capital and equipment to exploit minerals at any cost or risk.

One of the communities where Chinese activities in small-scale mining has assumed alarming proportions is Wassa Akropong in the Amenfi East District in the Western Region, which has gained the nickname ‘China Town’.

This is because of the large settlement of the Chinese in the town who operate different commercial activities across the town.

However, after the clampdown on illegal mining, their activities have gone down with only few of them in town.

Hitherto, the Chinese mingled with the Ghanaians at every level in the community. Nonetheless, the Daily Graphic team did not find any Sino-Ghanaian children nor intermarriages since they keep to themselves.

At the peak of the illegal mining activities, not only were the Chinese alleged to have paid huge sums of money for mining land; part of the money gained from exporting the mineral was used to bring in equipment and machinery.

They also provided all the mining support services, while others engaged in businesses to meet the everyday needs of the large Chinese population in Wassa Akropong which one of the Chinese spokespersons said numbered about 2,000.

The services the Chinese provide include the sale, rental and repair of earth-moving equipment and metal fabrication.

On entering ‘China Town’, one is greeted with the sight of shops, offices, restaurants, entertainment joints and hardware shops, all with Chinese signage.

Some of the Chinese the Daily Graphic spoke to said they had no ill-motives as they were genuine business people looking for opportunities.

One of them, Mr Andy Chin, said when they arrive to undertake mining activities, “we first see the chief and elders, as well as owners of the specific land or area we intend to mine gold. 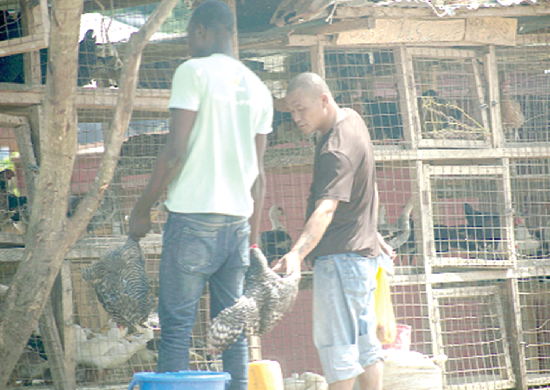 “When the permission is given, we pay the agreed amount of money to everybody before we start work”.

“We are law-abiding people and we respect the laws of the land. But we think that when the government makes the rules clearer to us, everybody will know what they can do or not do,” he said.

He explained that they also planned for reclamation to restore the land, but the chiefs in the communities collected the money to do the work, insisting that the Chinese never entered a land to degrade it without a plan to reclaim the land that was mined.

Many Chinese here engage in business; not all of them are involved in illegal mining but they are all portrayed as criminals, Mr Chin pointed out.

He said the government should not spare the rod on errant small-scale Chinese miners, but it should also make the rules and regulations clearer to them.

A local resident who took the Daily Graphic on a tour of some of the Chinese dominated areas indicated that the Chinese should not be condemned for their operations in the mining fields, instead the actions of some chiefs and people in communities in the district was the cause of some of the bad incidents such as poor environmental practices that was often cited as one of the ills of the Chinese sponsors of galamsey.

He explained that the Chinese who had flooded Wassa Akropong were generous, as they paid huge sums of money for land for construction as well as to landowners for them to mine.

The tour guide said the Chinese sometimes took over uncompleted buildings from people, paid them huge sums of money and completed the buildings, with an agreement with the owners to return the land and property to them after between 15 and 20 years.

“These kinds of activities made people rich overnight here in Wassa Akropong. Even owners of grocery shops were made rich by the Chinese who supplied them a range of goods on soft credit terms,” he said.

An attendant at a fuel station, who is an indigene, said the station had benefitted from large purchases by the Chinese.

The Chinese presence in the mining fields in Wassa Akropong has also positively impacted on the local financial sector.

The Amenfiman Rural Bank confirmed that before the government banned small-scale mining, the bank used to receive huge cash deposits from residents.

That, the bank said, bolstered its performance and helped it to become one of the first 20 companies on the Ghana Club 100, a ranking of the most prestigious companies in the country.