Nations are classified as first world, second or third world nations based on the level of infrastructural and economic progress that transforms the lives of the citizenry.

When Ghana gained Independence in 1957, the founding fathers realised that nations that were developing faster were those that their leaders placed premium on critical infrastructure for socio-economic transformation.

The then Town and Country Planning Department (TCPD), now land Use and Spatial Planning Authority (LUSPA), was tasked in 1958 to prepare the post-independent comprehensive spatial plan for Accra, dubbed “Accra: A Plan for the Town,” to guide physical development to befit the status of a new capital city of an independent African state.

Similarly, the coming into being of the LUSPA by Act 925 in 2016 and its implementation coincided with President Nana Addo Dankwa Akufo-Addo’s Coordinated Programme of Economic and Social Development Policies (CPESDP) 2017–2024, which identifies economic as well as social infrastructure as one of Ghana’s key strategic anchors.

In view of this, the Authority in collaboration with the Ministry of Energy developed spatial plans, structure and local plans for the development of a Petroleum Hub in the Western Nzema Traditional Area of the Jomoro Municipality.

The Authority has also collaborated with the Lands Commission to prepare a Structure Plan (SP) and Local Plans (LP) for the development of an Industrial Enclave and Urban Renewal Project at Afienya –Dawhenya-Prampram corridor in the Greater Accra Region. 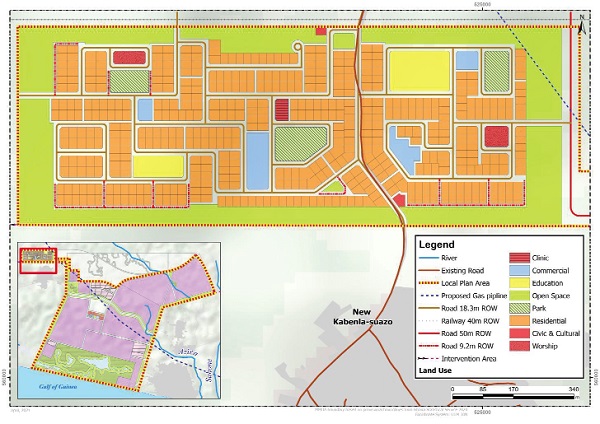 The SP will also provide guidance and certainty to prospective developers, government and the general public regarding permissible and prohibited land uses in the project area.

The LP for the petroleum hub on the other hand provide details of land use patterns showing individual plots of land for specific uses, open spaces, circulation, energy, water, and drainage systems among others. 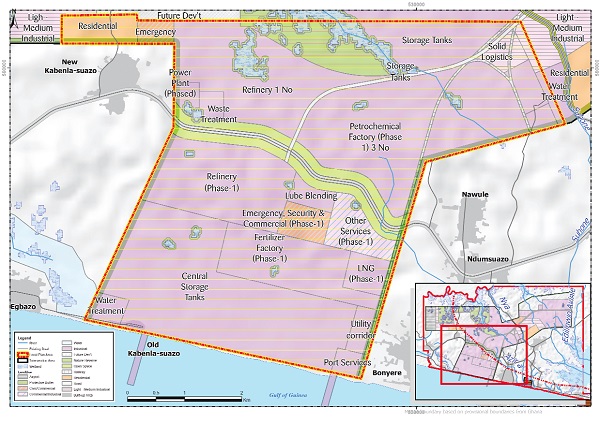 The total estimated land size for the entire structure plan area is 51, 252 acres, while the Petroleum Hub referred to as intervention area covers 20,000 acres of land and accommodates major facilities such as refineries, petrochemical industries and oil and gas tank farms, waste treatment plants.

The discovery and subsequent exploration of oil and gas in the Western Region of Ghana has contributed immensely to Ghana’s economic growth and development through job creation opportunities, oil and gas investment, and strategic planning of existing and future land use is necessary.

The Petroleum Hub Structure Plan Area encompasses 23 settlements that are expected to experience major settlement growth and developments in the next 15 years.

The implementation of the Intervention Area has been scheduled in three phases within the ten (10) year implementation period whereas the settlements surrounding the Petroleum Hub will be implemented within 15 years’ timeframe of the Structure Plan.

The LUSPA also collaborated with the Lands Commission to prepare a SP and an LP for the development of an Industrial Enclave and Urban Renewal Project at Afienya in support of the industrialization plan of government.

The Commission through an Executive Instrument E.I. 231 acquired 13,230.703 acres of land to be used for the Industrial Enclave and Urban Renewal Project. 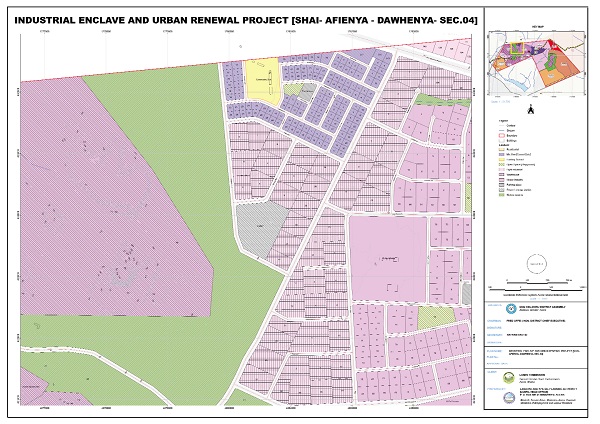 To achieve the objectives of such significant and economically essential initiative, it was of essence to prepare spatial and land use plans to order and regulate the use of land in an efficient and ethical way to ensure orderly development and thus preventing land use conflict.

The LPs for the industrial enclave and urban renewal project on the other hand proposes specific forms of development and regulations for the use of land through to the planning at individual plot level within the Structure Plan area. The plan provides the basis for making decisions about individual applications for development permits at the respective District Assemblies and for street addressing. 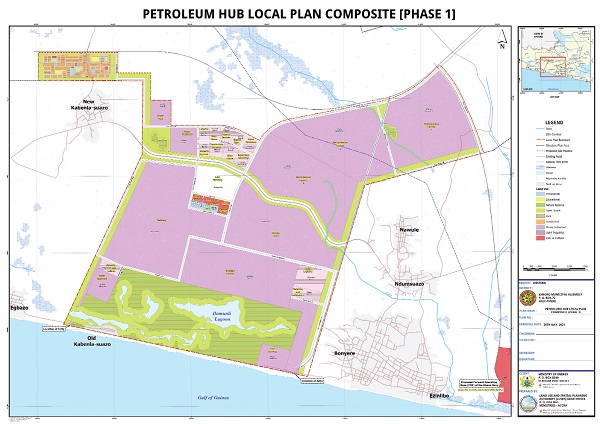 With the completion of the plan preparation process and consequent approval by the relevant authorities, it is expected that development will proceed according to the proposals made in the Spatial Plans.

These plans are important documents that will shape not only the development of the Petroleum Hub and the industrial enclave and urban renewal projects areas but also communities that are within the immediate neighbourhoods.

With the constant increase in Ghana’s populations and land as a fixed asset coupled with dwindling natural resources, development planning and control would help to secure a brighter future for current and the next generations.

All Ghanaians must be responsible citizens and support LUSPA and the decentralized planning systems at the Metropolitan, Municipal and District Assembly level by adhering to the development control laws and measures put in place to secure sustainable national development and safe environment.

The writer is the Corporate Affairs Officer, LUSPA. E-mail: This email address is being protected from spambots. You need JavaScript enabled to view it.