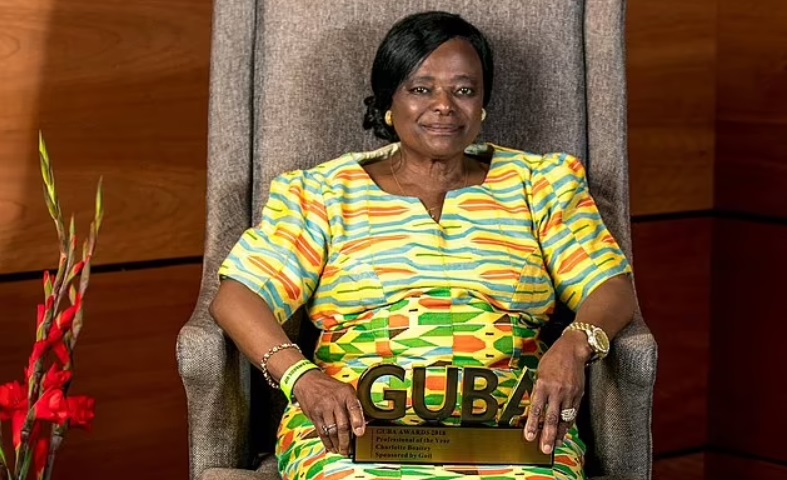 Kwasi Kwarteng's mother is a top lawyer who faced down prejudice to reach the top of her profession - after coming to the UK from Ghana in the 1960s with his father.

Charlotte Boaitey-Kwarteng, 78, is head of 12 Square Chambers, which is based in Holborn in north London and specialises in human rights, immigration and public law.

A profile online tells how her 'journey to the Bar as a black woman in the 1980s involved overcoming prejudice' from other members of the legal profession.

The new Chancellor's father, Alfred, who is 75, was an economist for the Commonwealth Secretariat.

The couple's listed address is a modest semi-detached home on a quiet street in Middlesex.

The pair moved from Ghana to the UK in the 1960s, before marrying in the St Pancras area of London in 1972.

The spotlight has fallen on Mr Kwarteng's family and background after he was appointed as Chancellor by the new Prime Minister Liz Truss yesterday.

Ms Boaitey-Kwarteng's profile on the website of the Inner Temple, which is one of the four Inns of Court, tells how she gained a law degree from London University in 1970.

She initially worked for the Community Relations Commission, which was set up in the late 1960s as part of efforts to help immigrants from Commonwealth countries integrate into Britain.

She then researched international law while living in Geneva as a 'stay at home mother'.

The lawyer then went on to study Social Anthropology at Oxford in 1980, before working as the consultant anthropologist for a TV programme made by Granada Television that looked into the Asante women of Ghana.

Inner Temple's profile adds that Ms Boaitey-Kwarteng's background is now in 'general common law', but says she has 'considerable experience' in 'criminal law, both defence and prosecution, as well as in employment and local government law.'

'She attended the Ghana Law School in 1997 to study Ghanaian customary laws and was admitted as a barrister of the Supreme Court of Ghana that same year.

Ms Boaitey-Kwarteng was appointed as a judge on mental health tribunals in 2004, and served in the role until she retired from it in 2014.

The lawyer was also appointed by the Royal Borough of Kensington and Chelsea to conduct an inquiry into racism in connection with the Grenfell Tower fire, which killed 72 people in 2017.

According to a friend of Mr Kwarteng who spoke to The Times, his mother is a 'particularly important figure in his life'.

They added: 'She is religious and ingrained a love of public service in him.'

Mr Kwarteng, who was born in east London in 1975, is the only child of his parents.

They first sent him to a state primary school in Waltham Forest, before transferring to the private prep school Colet Court in Richmond, west London.

Mr Kwarteng then won a scholarship to Eton, where he was regarded as one of its brightest pupils.

He went on to study at Cambridge University, where he read classics and history. He later earned a PhD in economic history from the same university in the year 2000.

His doctoral thesis was on the 'recoinage crisis of 1695-7'.