Breath of death: Accra in dire need of life

“Then the LORD God formed a man from the dust of the ground and breathed into his nostrils the breath of life, and the man became a living being,” (Genesis 2:7).

These words from the Bible show that air is life and quality air means quality life.

It also underscores the need to preserve the quality of the air we breathe and the environment at large. However, this is not the case with Ghana’s capital city, Accra, as the over 2.5 million residents are suffocating from massive air pollution.

A conspiracy between scrap metal dealers; drivers of rickety vehicles; butchers who use lorry tyres to treat meat and food vendors who cook in open spaces leaves many parts of the city with polluted air.

This is how e-waste is burnt at the Agbogbloshie scrap yard, leaving the entire area polluted

No second slips by without the atmosphere being engulfed in thick, dark and toxic smoke from the Agbogbloshie scrap yard, as scrap dealers burn electronic waste in search of gold, silver, copper, platinum, iron, aluminum and tin.

(Click the link below to read more about the activities of the scrap dealers: https://www.graphic.com.gh/features/features/dying-to-live-the-case-of-scrap-metal-business-in-accra.html).

The secretary of the Greater Accra Scrap Dealers Association (GASDA), Alhaji Mohammed Ali, attributed the continuous burning of e-waste by scrap dealers to the lack of a viable alternative to extract the ferrous metals.

“Of course, we know that most of the e-waste we burn here is dangerous to health, but we do not have any alternative ways of removing the rubber, but to resort to burning,” he said.

He, however, stressed that scrap dealers were not the only “bad boys” in the air pollution conundrum, as many others sat on the accused bench.

Alhaji Ali hit the nail on the head because butchers have also defied the provision of the Public Health Act, 2012 (Act 851) that debars the use of lorry tyres to process meat. One only needs to visit slaughter houses at places such as Kaneshie, Jamestown, Turaku near Ashaiman to see how those communities are battling with polluted air from the activities of butchers.

Butchers at Turaku, near Ashaiman, still use lorry tyres for treating meat, leading to pollution of the air.

To add insult to injury, food vendors have converted the shoulders of major roads into makeshift kitchens, where foods are cooked and sold.

Along the Graphic Road in particular, a string of food vendors have pitched camp and resorted to the use of firewood and charcoal in cooking in the open spaces.

A February 2020 study on air quality funded by the U.S Environmental Protection Agency (EPA), revealed that the quality of air in the Greater Accra Region was above the acceptable World Health Organisation (WHO) standards by over 300 per cent.

The WHO annual recommended guideline for outdoor air quality is 10 micrograms per cubic metre, but the research revealed that Ghana's is 31.1 micrograms and contains ultra-fine particles which can penetrate and lodge deep inside the cardiovascular system.

The continuous pollution of the air has dire consequences on the health of people who inhale it and the environment.

A 32-year-old scrap dealer at the Agbogbloshie scrap yard, Abdulai Issah, narrated how he spent so much money on his health.

“I was very active in the scrap business, but I fell sick and I was taken to the hospital. When the doctors examined me, the first thing they asked was whether I smoked cigarette and I said no. They said it was the toxic smoke I inhaled at the scrap yard that caused the sickness. 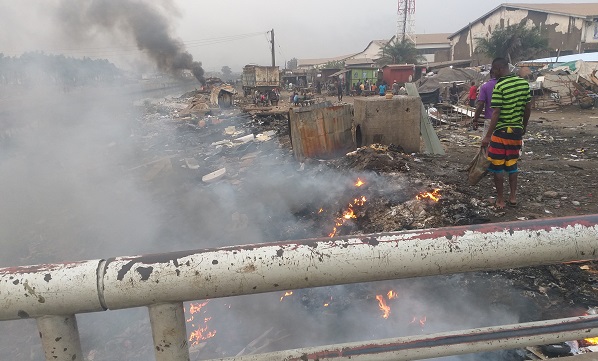 Burning of e-waste along the Graphic Road

Meanwhile, WHO estimates that 90 per cent of the world’s population breathes air containing high levels of pollutants, with an alarming death toll of seven million people every year caused by ambient and household air pollution.

It added that exposure to polluted air that penetrated into the lungs and cardiovascular system caused diseases such as stroke, heart disease, lung cancer, chronic obstructive pulmonary diseases and respiratory infections, including pneumonia.

WHO further states that air pollution is a critical risk factor for non-communicable diseases (NCDs), causing an estimated 24 per cent of all adult deaths from heart disease, 25 per cent from stroke; 43 per cent from chronic obstructive pulmonary disease and 29 per cent from lung cancer.

The worsening state of air pollution Accra is a great threat to the achievement of the United Nations (UN) sustainable development goals (SDGs) on health and the environment. For instance, SDG 3.9: seeks to “substantially reduce the number of deaths and illnesses from hazardous chemicals and air, water and soil pollution and contamination” by 2030.

Specifically, SDG 7.1.2 is targeted at “increasing the proportion of population with primary reliance on clean fuels and technology” to ensure improvement in the health of people.

With barely 10 years to the deadline for the SDGs, it will take a miracle to achieve those targets considering weak approach to tackling the menace of air pollution in the country.

In 2017, the German government announced a 25 million euro support to Ghana to tackle the growing electronic waste menace that has been the major source of air pollution. Dubbed: “Environmentally Sound Disposal and Recycling of E-waste Programme,” it is a technical cooperation between MESTI and GIZ and meant to support the sound disposal, collection and recycling of e-waste in the country within the framework of Act 917.

The first phase of that project saw the setting up of a health post at the Agbogbloshie scrap yard to cater for the health needs of the scrap dealers and establishment of a technical training centre for capacity building.

The Director of Policy Planning Monitoring and Evaluation at MESTI, Mrs Lydia Essuah, said some 500 persons have been trained on environmentally sound manual dismantling of e-waste at that centre.

She said MESTI was also laying the structures for the smooth take-off of the National Integrated E-waste Programme meant to efficiently manage e-waste.

It is important for MESTI, the EPA, metropolitan, municipal and district assemblies (MMDAs) and other stakeholders to take the bull by the horn to tackle the air pollution menace in Accra.