Dying to live: the case of scrap metal business in Accra 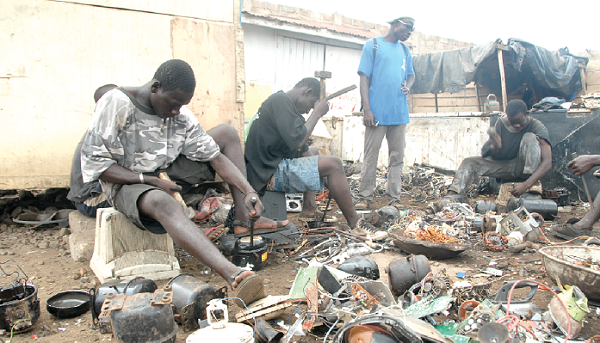 Deafening sounds from hammers that strike ferrous metals can be heard from all angles of the squatter enclave.

Clusters of thick, dark smoke emanating from the burning of waste electronic products and other scrap material fill the atmosphere, blurring vision and causing teary eyes.

The young, the old, male and female are performing one task or the other in the chain of activities associated with the scrap metal business.

From dawn to dusk, they comb through what is known as the world's biggest dump site for electronic waste materials, in search of worn out fridges, television sets, computers, and other electronic waste to extract copper, brass aluminium and other useful matter. It is what they do for a living. But, first, it feeds them, then kills them slowly.

This scrap metal dump site located at Agbogbloshie in the Greater Accra Region is not only a business centre for dealers in scrap metals but also a home for many people.

Most of the people, who live in this slum area, are from the rural north of the country while others are foreigners from neighbouring West African countries such as Nigeria, Burkina Faso, Niger and Togo.

They live, work, dine and wine in that part of the city oblivious of the hazardous conditions they are exposed to daily. The most affected group in this area is children who engage in all forms of work that contravenes the laws of the country.

Among the dealers in this scrap metal business are children who should be in school but who mortgage their future and put their lives on the line. They join the crew of scavengers at the site and do work that weigh them down physically and psychologically.

One such child is Abdul Saani, a 17-year-old student of one of the privately owned basic schools at the Old Fadama slum who has been in that scrap business since 2011.

A pile of scrap metals at the scrap centre

hen I met him at the scrap line about 11 a.m. on Thursday, May 10, he was busy scavenging for the goodies. Armed with a magnet, a wheel barrow and a sack, he moved from one place to the other, rolling the magnet to attract magnetic materials.

I followed him to a base where about 10 others almost his age, were also working on their wares. One of them who gave his name as Nicholas Agor (not real name), a Form Two student, confessed to have left the class at the blind side of his teacher to work at the site.

"I decided to come and work here to get some money for my upkeep because I live with my sister in the Old Fadama slum. She is also a head porter (Kayayo) and cannot take care of all my needs," he said.

Meanwhile after about 30 minutes, Abdul had sorted out the goodies and was ready to mount it on a scale that had been planted there by his “boss.” He placed the items on the scale and the reading stood at 55 kilogrammes.

The reading on the scale meant that he had made GH¢44 because a kilogramme was worth 80 pesewas.

An excited Abdul told me that it was a sign of a good day. “On a good day, I can make more than GH¢100 and at least GH¢600 a week. He works under a "master" who buys his wares and resell to others in the chain.

Without protective clothing or any efficient tools to ply their trade, they handle the metals with bare hands and burn the electronic waste in a very crude manner that emit poisonous gases into the atmosphere. This practice leaves the area and its surroundings filled with polluted air that exposes the people to health risks and respiratory diseases.

Abdul threw more light on the side effects of the scrap business, saying: "It is a difficult thing to do because sometimes the metals can hit your head, eyes and other parts of your body. At times, we cough so much after work and have sleepless nights. But we cannot stop it because we get money from it."

The side effect the scrap metal business has on the people and the public is a major concern that needs to be looked at, especially when there are dire health and environmental consequences.

For instance, even though the place is very unhygienic, food vendors and fruit sellers carry their wares around for the public to buy and eat.

Also, livestock such as cattle, sheep, goats, feed on piles of refuse that are dumped around. These animals are later slaughtered and their meat sold to members of the public.

There are no figures to show the number of deaths that result from the risky lifestyle in this area but it is certain that many lives are lost every now and then.

Despite the physical and health risks the scrap metal business poses, it continues to thrive in contravention of the laws of the country because of the insatiable taste for second-hand electronic goods which end up as scrap metal.

Hundreds of tonnes of these used products are mostly imported from the United States of America (USA), Asia, Australia, and Western Europe with impunity.

Food is sold under unhygienic conditions at the scrap enclave

It is estimated that about 500 containers of these second-hand electronic products are imported every year, with a chunk of it not able to function under one year.

These importations go on even though Legislative Instruments (L.I. 1586) of 1994 and L.I. 1693 of 2001 placed a ban on the importation of some used merchandise such as mattresses, underwear and fridges.

The Abossey Okai business enclave, which is about 500 metres away from the hub for scrap business, is flooded with these second-hand products and serves as one of the main suppliers of scrap metal for the dealers.

Key state agencies such as the Ghana Standards Authority (GSA), the Environmental Protection Agency (EPA), the Customs Division of the Ghana Revenue Authority (GRA) need to collaborate effectively to enforce the regulations on the importation and dumping of second-hand electronic products on Ghanaian markets that end up as scrap metal.

There is a relentless war to rid the country of filth and the government’s resolve to make Accra the cleanest city in Africa. If this feat is to be achieved, attention has to be given to the proper management of e-waste.

The Ministries of Sanitation and Water Resources, Environment, Science, Technology and Innovation, Local Government and Rural Development, and the Accra Metropolitan Assembly (AMA) need to design an integrated approach to tackle the challenge head-on.