When Ghana thrilled Japan with music

IT was June 18, 2022 at the Akasaka Civic Center in Minato City, Japan and an enthusiastic audience beamed with appreciation as reworked Ghanaian traditional music flowed from the stage.

It was the first of gigs laid on for the musicians by the Embassy of Ghana in Japan in collaboration with a number of outfits including Bayside Agency, JafriQ Radio, Ajimoto Foundation and E-Light Corporation.The two-week package was dubbed The Three Ghanaian Masters.

Ghana’s Ambassador to Japan, Mrs Genevieve Edna Apaloo was among the audience at the concert. There were also representatives from about 20 foreign missions based in Japan at the event. Dr Ibrahim Awal, Minister of Tourism, Arts and Culture, was also present.

Mrs Apaloo said the event was meant to bring Ghanaian and African culture “to warm the hearts of our Japanese friends as the country recovers from the COVID-19 pandemic.”

Apart from the Akasaka Civic Center concert, the musicians performed at three other shows and featured at a couple of private parties.

Referred to by many as the Flute Magician, Dela Botri started as part of the famous Pan African Orchestra from 1990 to 1996. He later formed his own band, Hewale Sounds which became the resident group of the International Centre for African Music and Dance at the University of Ghana, Legon.

He has actively been playing music for about four decades and has held numerous workshops and also performed in several countries. He released two new albums of contemporary and traditional music last February.

Aaron Bebe Sukura is a multi-instrumentalist who has been working at the Music Department of the University of Ghana since 1992 as a senior xylophone instructor.

He also plays the seprewa, mbira, flute and guitar. He was a member of the Pan African Orchestra until he formed his group called The Local Dimension with well-known ethnomusicologist, Prof John Collins.

Winchester Nii Tete is a percussionist from a family of respected drummers such as Mustapha Tetteh Addy, Obo Addy and Nii Adjiri ‘Shikome’ Williams.

He has been living and performing in Japan since 2004. He is a versatile player who has worked with a variety of musicians on different music genres.

Repertoire for the trio’s  performances included rearranged traditional pieces from across Ghana.  The idea was to offer samples of the wide variety of music available in Ghana. 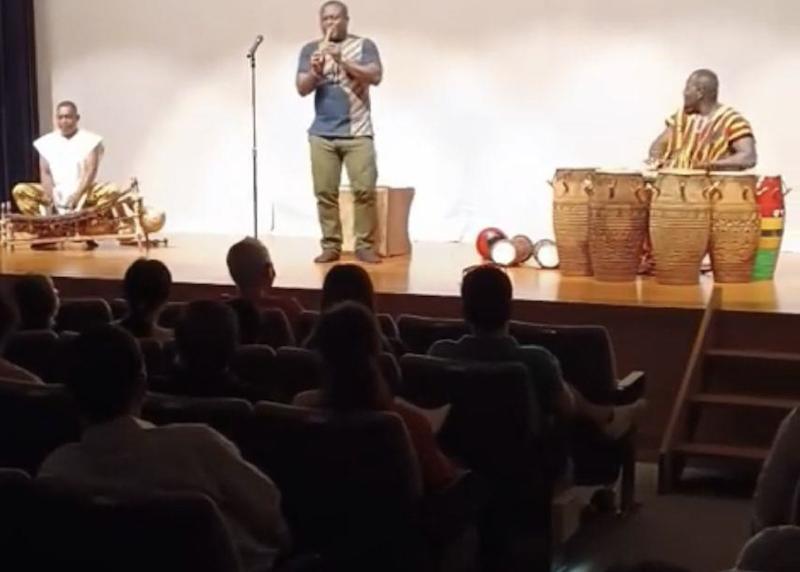 They took turns with solos on their instruments and also played in unison where necessary to demonstrate the cohesion that exists in Ghanaian traditional music.

Some Ghanaians at the events familiar with some of the tunes on offer occasionally went up to participate in the renditions.

“It was a wonderful time for us performing in Japan,” said Dela Botri. “The experience exposed aspects of Ghanaian music and culture to Japanese folks and everything went well.

"I wish all our diplomatic missions abroad try to do similar things. Such programmes sell who we are to others in a fascinating manner.”

Sukura agreed with Botri and said it was a highly successful venture worth all the effort put in to organise it. To him, Ghana’s musical resources could be properly harnessed to her advantage.

“There had never been such an event in Japan. Everyone who saw us perform were happy. If all of Ghana embassies around the world can do something like that, maybe hosting groups as well as individual masters, we would be able to raise high the flag of Ghana,” Sukura pointed out.

The musicians acknowledged the vital role played by Nana Kusi Mograbi of the Ghana Embassy in Japan in ensuring the Japan experience came off successfully.

They referred to efforts he had made on previous postings in Egypt and the Czech Republic to put Ghanaian music across in those places and were not surprised he had done something similar in Japan.

Botri mentioned that the first time he embarked on a cultural project with Nana Mograbi was in 2007 when he invited some members from Hewale Sounds to Cairo for a performance.

“It opened doors for us because we’ve been invited to Cairo to perform on three other occasions by different entities since our 2007 trip. The last one was in 2019. We could even be going back there before the end of this year,” Botri stated.

He was again involved with a Ghanaian music project organised by Nana Mograbi when he was stationed in Praque in 2013. So he didn’t hesitate when he was called again by Mograbi for the Japan programme.

“People are naturally curious about cultures from other places so there’s often a warm reception when you offer something exciting from where you are from.

"We were well-received in Japan and we trust there will be some positive spinoffs from that trip. Our doors are wide open for any things that might crop up again.”

Sukura indicated he being aware there were already some moves by a team of Ghanaians and Japanese, for them to return and possibly collaborate with Japanese musicians on stage and in the recording studio.