It was love at first sight – Giovani on wife 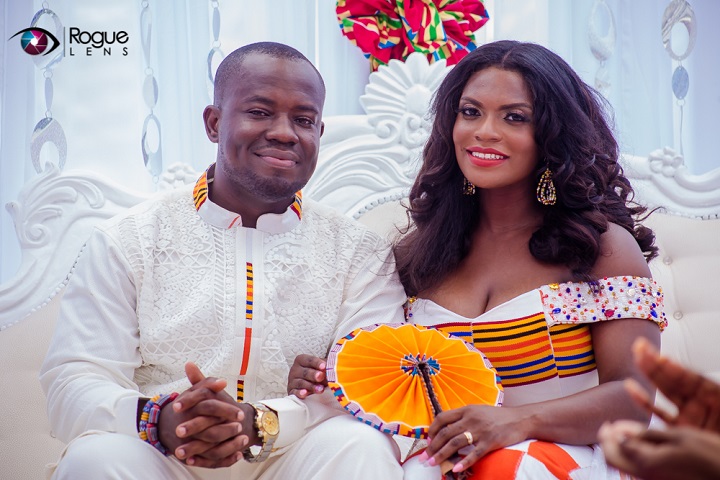 Giovani and his wife Belinda

Media personality, Giovani Caleb, has opened up about meeting his wife Belinda Boadu and according to him, it was love at first sight.

“I will say it was love at first sight for us, she liked me and I also did. What transpired was that I took her pictures, we exchanged numbers and I sent them to her. Later she texted me to tell me that the quality of the pictures was not good and we in effect had to meet again to take new ones and that was how it started," he told Deloris Frimpong Manso in an interview on the Delay Show.

Describing his wife, the host of Date Rush on TV3 said, “she is very intelligent, one that has contributed to my brand a in a very positive way.”

Giovani and Belinda, who is the Managing Director of Impart & Impact Education, career and business consulting, got married at Event Haven on May 28, 2016.

Read more: Nii Kpakpo Thompson reveals why he is no longer host of Date Rush

The classy ceremony was attended by family, friends and colleagues in the media industry including Kofi Okyere Darko, Caroline Sampson, Lexis Bill and Francis Doku.

The white wedding followed their traditional marriage on Thursday, May 26. They have two children.

Real name Caleb Adjomah, Giovani first appeared in the media industry on Radio Univers in 2008 when he was in his second year at the University of Ghana, Legon.

He joined Global Media Alliance as a national service person and was promoted to programmes manager due to his diligence and professionalism.

He later joined EIB Network's Live FM in 2015 and is currently host of Showbiz 360, Date Rush, 3FM Drive among others on TV3 and 3FM.

Illegal billboards in Gt. Accra to go down - RCC, advertising association get tough