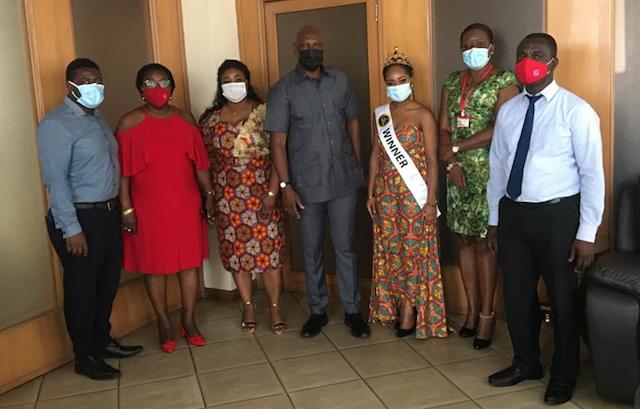 NEWLY crowned winner of TV3’s Ghana’s Most Beautiful (GMB) pageant, Naa Dedei Botchway has visited the offices of the Graphic Communications Group Limited (GCGL) as part of her media rounds.

The visit, which took place on Tuesday, September 29, also gave Naa, who represented the Greater Accra Region in the pageant, an opportunity to express her appreciation to the GCGL for its support for the pageant over the years.

She was accompanied by Group Head, Corporate Affairs at Media General, Chris Koney and chaperone for GMB 2020, Victoria Nyantakyi.

The team first met with the Managing Director of the GCGL, Mr Ato Afful who wished Naa well and encouraged her to use her crown to champion the socio-cultural development of the country in line with the pageant’s objectives.

He indicated that the pageant had been a great tool for national cohesion and tasked Naa to go all out to make great impact with the project that she would be embarking on during her tenure.

“The mandate of GMB is to engender national cohesion with the brand they are developing and with current happenings, this goal should be a priority.


Also, it is important that while developing the brand, the focus will also be to learn, better and improve the show. We continue to pledge our support and relationship we hold together to push the show,” he stated.

Naa assured that she was ready to work and champion the country’s development and would not let the thought of being a beauty queen get to her head.

“This pageant is not all about beauty but a mandate to contribute to Ghana’s socio-cultural development. I’m happy that Graphic is always on board and I’m fully dedicated to championing a great cause that will benefit the country,” she said.

The team also called on the Editor of the Daily Graphic Kobby Asmah, who encouraged Naa to be a role model to the youth who are inspired by the accomplishment of people like her.

“Today, people who are expected to be role models are rather leading the youth astray on social media with their wrongful acts. I hope you will use your crown to inspire a better narrative than it is happening now,” he said.

This year’s edition of Ghana's Most Beautiful, which aims to promote development through culture and unity, was launched in June with 16 contestants representing the regions of Ghana.

However, six made it to the finals on Sunday, September 20 and they were Greater Accra’s Naa (winner), Zuzu from the Northern Region, Talata of the Upper East Region, Ahafo Region’s Abena, Volta Region’s representative, Kafui, and Afriyie from the Central Region.