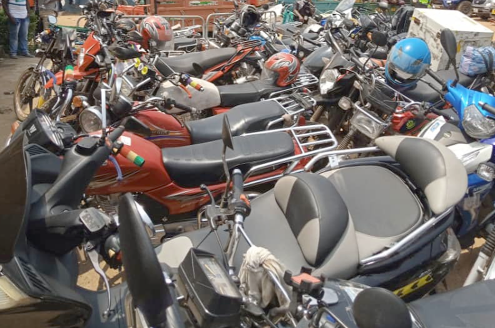 Some of the impounded motorbikes
30.5k Shares

The Accra Regional Police Command has impounded 394 motorbikes following an operation to clamp down on the use of motorbikes for criminal activities in the metropolis.

Some of the motorbikes were impounded because they were unregistered. Other offences include riding without helmets, use of motorbikes without licence or insurance, among others.

The exercise is part of periodic police operations to clamp down on criminal activities and prevent crimes usually committed by users of motorbikes.

The Public Relations Officer of the Accra Regional Police Command, Deputy Superintendent of Police (DSP) Mrs Effia Tenge, speaking on the penultimate day of the five-day operation said it was also in line with plans to sanitise the metropolis by reclaiming stolen motorbikes.

She said the exercise was also aimed at compelling recalcitrant riders to regularise or update their documentation in line with road traffic regulations.

Additionally, she said the operation was part of police efforts to sustain the current security situation in Accra.

Mrs Tenge said the exercise followed a directive by the Accra Regional Commander, Deputy Commissioner of Police (DCOP) Mr Afful Boakye Yiadom to all police divisional commanders under the command.

Some of the riders of the motorbikes who were either arrested during the exercise or who later handed over themselves to the police and claimed ownership are scheduled to be screened by the various divisions for the necessary action.