PIAC @ 10: A decade of championing transparency and accountability in the management and use of petroleum revenue 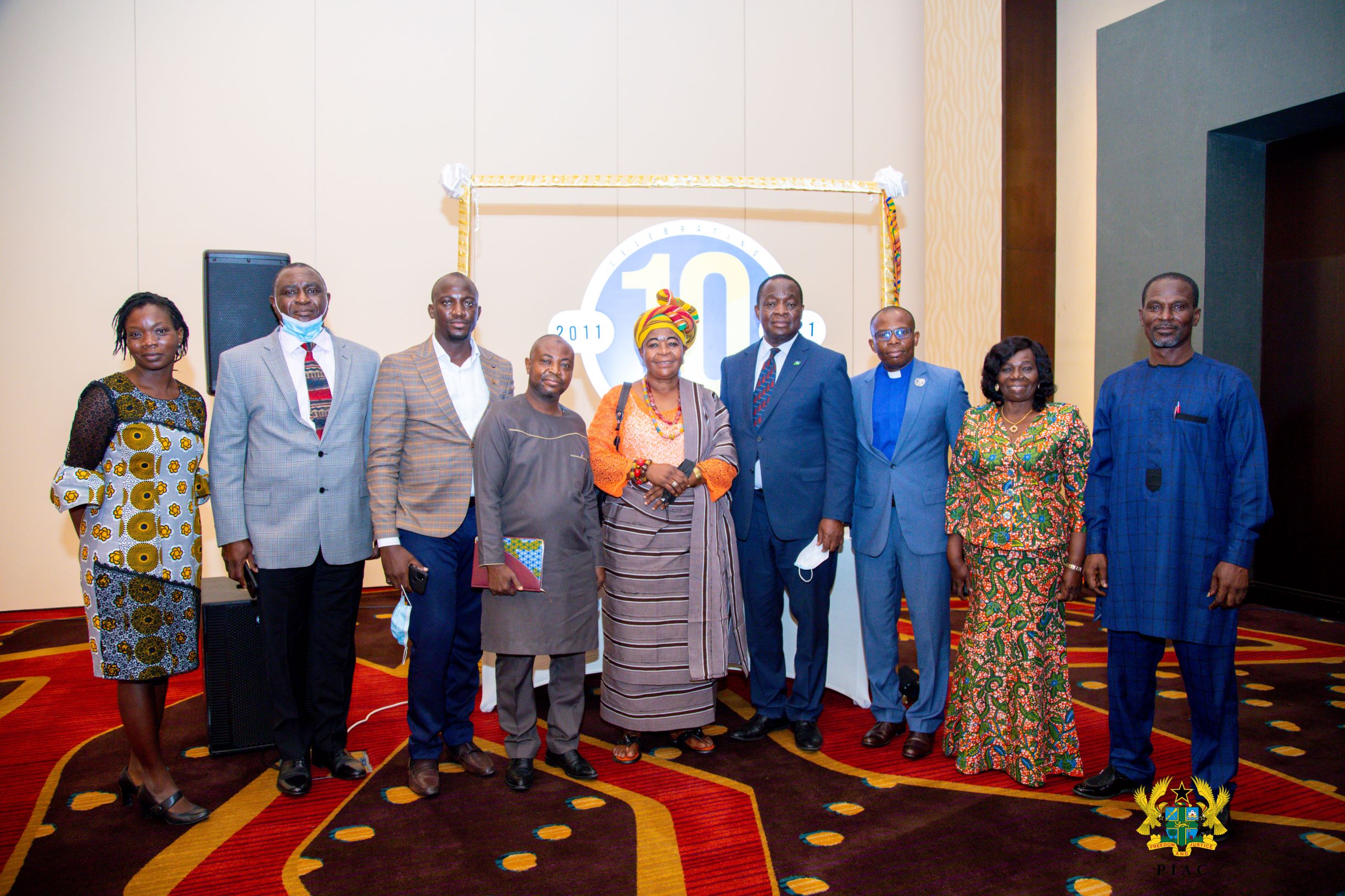 Some of the current PIAC members

Natural resources, when exploited and managed well, remain a great source of wealth for nations.

After a rather poor history of the management and use of the revenue of other natural resources in Ghana over the years, there was a resolve to do things differently with petroleum.

Although crude oil production in Ghana has its history dating as far back as the early 1970’s, the discovery of oil in commercial quantities in 2007, and its commercial production from 2010 enabled the country to join the league of oil producing nations.

The enactment of the Petroleum Revenue Management Act (PRMA), 2011 (Act 815) marked a new era; where the country sought to do better with revenues from this particular natural resource – oil and gas.

The PRMA is to “provide the framework for the collection, allocation and management of petroleum revenue in a responsible, transparent, accountable and sustainable manner for the benefit of the citizens of Ghana in accordance with Article 36 of the Constitution for related matters.”

In line with the Act’s framework, provision was made for the establishment and administration of the Petroleum Holding Fund (PHF) which receives all petroleum revenues and from which allocations are made to other designated funds.  The formula for distribution and disbursement of funds from the PHF is outlined by the Act in the diagram below:

Statutory funds established for the purpose of petroleum revenue management and use are the Ghana Stabilisation Fund (GSF), the Ghana Heritage Fund (GHF), the Annual Budget Funding Amount (ABFA). Other funds that receive petroleum revenues are the Contingency, Sinking Funds and the Ghana Infrastructure Investment Fund (GIIF).

To further strengthen transparency and accountability in the management and use of petroleum revenues, Section 51 of the Act provided for the creation of the Public Interest and Accountability Committee (PIAC), as an additional citizen-led oversight body, to complement parliamentary oversight.

The rest are the Ghana Journalists Association (GJA), the Ghana Bar Association (GBA),the Institute of Chartered Accountants, Ghana (ICAG),the Ghana Extractive Industries Transparency Initiative (GHEITI), Christian groups, Muslim groups, and the Ghana Academy of Arts and Sciences. The composition of PIAC shows that all citizens are represented, thereby promoting inclusiveness in the governance of the resource.

The accountability committee has three main objects as outlined in the PRMA, which are, to monitor and evaluate compliance with the Act by government and relevant institutions in the management and use of petroleum revenues and investments and to provide space and platform for the public to debate on whether spending prospects and management and use of revenues conform to development priorities as provided under Section 21(3).

The third mandate is to provide independent assessment on the management and use of petroleum revenues to assist Parliament and the Executive in the oversight and the performance of related functions.

The PIAC, in fulfilling its three-fold mandate, has engaged citizens at both the district and regional levels, and in all the regional capitals of the country.

As a statutory requirement, the committee publishes two reports – semi-annual and annual and has so far published 19 Reports -10 annual and nine semi-annual reports. Indeed, these reports remain a credible source of data on oil and gas production, revenue accrued, as well as its utilisation in Ghana.

The reports, have each year, highlighted issues that require attention and have also proffered recommendations in that regard. The reports are submitted to Parliament, the Presidency and also shared with stakeholders, with highlights shared with the public through various public fora, media outreach programmes and via social media platforms.

As part of its independent oversight mandate,the PIAC has visited and inspected projects funded from the Annual Budget Funded Amount (ABFA) in all the regions of the country, and has made public its findings on these projects.

In August 2020, the committee published its first Issue Paper on the management and use of petroleum revenues, which catalogued a number of issues that needed urgent attention. It is important to highlight that these issues had been raised in previous PIAC reports. Some of the issues relate to the administration of the ABFA, revenue collection, management and investment of the Ghana Petroleum Funds (GPFs) and the implementation challenges under the PRMA.

Despite the achievements made over the last 10 years, the PIAC’s work continues to experience challenges. There is room for improvement regarding the implementation of recommendations made in the PIAC reports that highlight infractions or mismanagement of petroleum revenues in the country.

Furthermore, the PRMA did not make provision for the PIAC to sanction for infractions. To a large extent, the PIAC can only make recommendations to Parliament for appropriate actions to be taken.

Ten years is enough time to do a retrospection of the mandate given to the PIAC and how effective its execution has been. It is also time to look at how the committee can be strengthened further to help strengthen the transition from transparency to accountability in the management and use of the country’s petroleum revenues.

Repeatedly making recommendations which are discussed in the public space and gradually left to fade away is not good enough. They must be acted on by relevant institutions to ensure that governance of the sector is continually improved so that the resource will benefit citizens optimally.

Ten years on, it is time to bridge the gap between the PIAC and the public. The committee’s website remains a repository of data on the country’s petroleum production, liftings, revenues and their utilisation till date, and the public is invited to visit the platform for information and education.The PIAC is also present on social media: Facebook, Twitter and Instagram as @PIAC Ghana. Connect with the committee today and let us collectively push for accountability.


The writer is the Communications Officer at the PIAC
Writer’s email: This email address is being protected from spambots. You need JavaScript enabled to view it.;