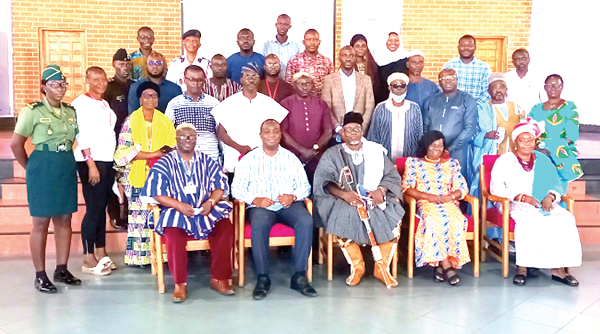 Participants after the forum

The Public Interest and Accountability Committee (PIAC) has said the lack of long-term plan to inform how revenue from petroleum activities are spent has led to the financing of small projects which do not make big impacts.

Such small projects, including toilets and classroom blocks, do not also serve as catalysts to drive a larger economy, a phenomenon known as ‘spreading thin’.

The absence of such a plan had also led to the selection of the 2020 to 2022 priority areas for the annual budget funding amount (ABFA) disbursement without parliamentary approval, PIAC said.

At a Regional Public Forum on the Management of Petroleum Revenue in Tamale last Wednesday, the Chairman of PIAC, Professor Kwame Adom-Frimpong, said the findings of the 2020 report showed that surface rental payments remained in arrears to the tune of $2.11 million for last year, representing a 34.71 per cent increase over the 2019 arrears of $1.56 million, adding that non-payment of that stream of income denied the Petroleum Holding Fund (PHF) of the necessary inflow.

"Contrary to the Petroleum Revenue Management Act (PRMA), an unutilised amount of GH¢827.60 million from the 2017 to 2019 was spent to partially meet the shortfall in Annual Budget Funding Amount (ABFA) receipts caused by the impact of the COVID-19 pandemic and its associated effects on the crude oil price globally," he added.

According to the chairman of the committee, the petroleum sector witnessed the drastic decrease in revenue as a result of the effects the COVID-19 pandemic exposed the country to.

According to him, the revenue streamed from sources such as the Royalty, Carried and Participating Interest (CAPI), Corporate Income Tax (CIT), Surface Rental, Petroleum Holding Fund (PHF), and others.

The committee recommended that the Ghana Revenue Authority (GRA) should as a matter of urgency initiate actions to recover Surface Rental Arrears with the appropriate interest as provided for by the FRMA.

The Ministry of Finance was also tasked to ensure that priority areas selected were presented to Parliament for approval before implantation as required by Section 25(5) of the FRMA.

"The ABFA should not be used to serve the purpose of filling expenditure gaps in times of revenue shortfall in the budget as this is the purpose of the GSF under the FRMA," the chairman said.

The PIAC further recommended that there was the need for a long-term national development plan to guide the spending of petroleum revenues, instead of resorting to the fall-back position of ministerial in selecting of the priority areas.

Also that the necessary gas infrastructure needed to be put in place by the government to ensure that the make-up gas from the Sankofa-Gye Nyame (SGN) was taken and utilised.

According to the regional minister, some projects that were funded with the petroleum sector revenue included the construction of 12 community mechanised solar power water systems in communities such as Tolon, Zabzugu, Yendi, Mion and Yagaba.

Alhaji Shaibu added that road infrastructure, including the upgrading of the Tolon-Kumbungu road, upgrading of 62.4 kilometres Tamale-Salaga road and the rehabilitation of some selected roads in the Tamale Metropolis were funded from the petroleum revenue.

"The construction of a 12-seater water closet with mechanised boreholes in Tolon, Kumbungu and Zabzugu was funded by the petroleum sector," the minister added.