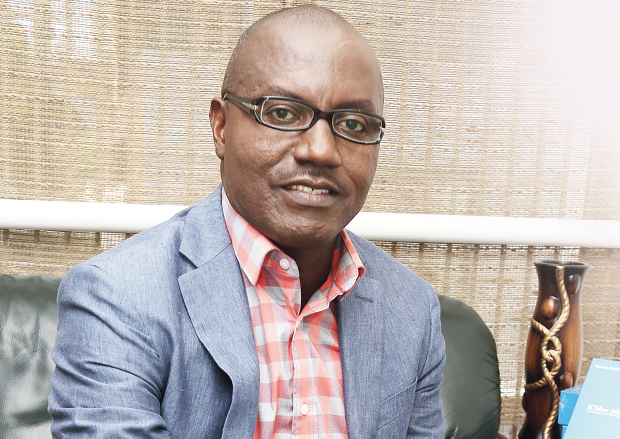 His major dream was to become a proficient pharmacist while in college. However, that dream was thwarted when he was persistently denied access to the computer room at his university in New York.

This undoubtedly did not sit well with him as every young student in his milieu in the early 90s wanted to have a feel of how computer works.

He found motivation from being denied and satisfied his curiosity about what was so special behind those computer monitors.

Consequently, he changed his course from Pharmaceutical Science to Computer Science with a focus on Computer Security, with the sole mission of making high quality premium technology affordable and accessible to the masses around the world who are denied access to the power and freedom that technology brings.

At present, Mr Kwasi Twum-Ampofo, who is the Founder and Chief Executive Officer of KTA Mobile, has managed to break into mobile telephony to create his own brand of smartphones, making his outfit the first Ghanaian-American smartphone company to hit the international smartphone market, while building and maintaining a portfolio of other technology devices and mobile applications that he intends to introduce. 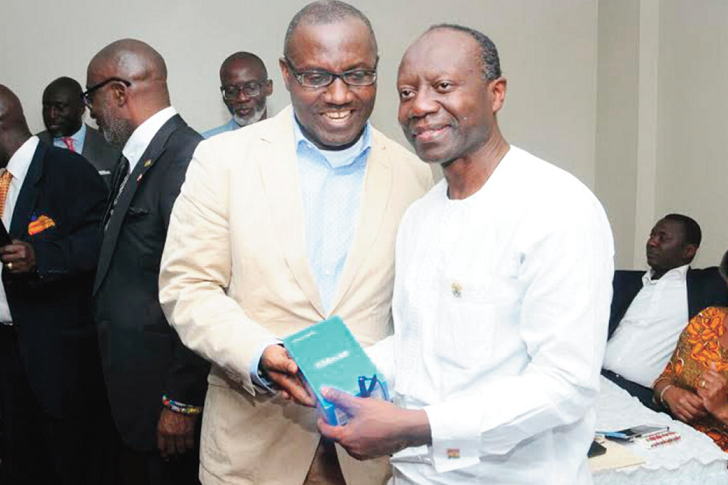 Mr Twum-Ampofo and the Minister of Finance, Mr Ken Ofori-Atta

In a chit-chat with The Mirror to share his success story, innovative Twum-Ampofo said his adventure into the mobile telephony world was based on his personal observation of mobile phone usage in Ghana while he was on vacation sometime ago.

“I realised that most people were using two or more phones. Anytime you inquire the reason, they lament that the network was often bad, hence the need to keep more than one phone. When I went back, I resolved to come out with a smartphone that would be of top quality like other well-known international brands and at the same time affordable.

“Besides, most of our brothers and sisters come home on vacation and they are unable to use their handsets unless it is decoded.

Therefore, they always have to get another phone to be able to make calls. I factored all these worries to come out with my own brand of smartphone that can be used both home and abroad,” he narrated.

Mr Twum-Ampofo was not on a wrong footing. Mobile telephony is seen as having allowed Ghanaian telecommunications to leapfrog over high overhead costs of traditional wire-line telephony. 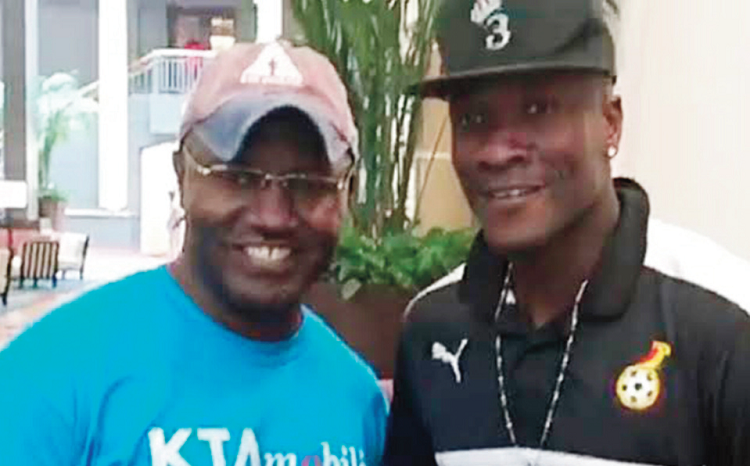 No matter where you are in Ghana, you can access signals without access to costly copper wire infrastructure.

Within a five-year period from concept to design, KTA Mobile (coined from his initials) launched its brand, styled Nuloop Starline, on April 23, 2017, on Amazon.com, one of the largest retail distributors in the world.

After the meeting, the Minister of Finance, Mr Ken Ofori-Atta, and his team encouraged Mr Twum-Ampofo to come back to Ghana with his product and expertise and help build the nation through advancement and investment in the technology sector.

According to Mr Twum-Ampofo, the sole aim of KTA is to open its manufacturing plant through the One District, One Factory initiative, creating jobs for the future that will give our youth and nation a global competitive edge.

“I know I will have the support needed to make the dream of having KTA's manufacturing plant in Ghana a reality.

“We intend to acquire an office in Osu, a suburb of Accra to impart knowledge and also prepare for its initial nationwide launch in September this year,” he mentioned.

Mr Twum-Ampofo reiterated that in the past, consumers always had issues with typical Ghanaian associated products.

Therefore, with Computer Science being his passion, he intends to take the consumer through every stage of innovation for a higher quality product to erase the erroneous perception about poor packaging and finishing of Ghanaian products. 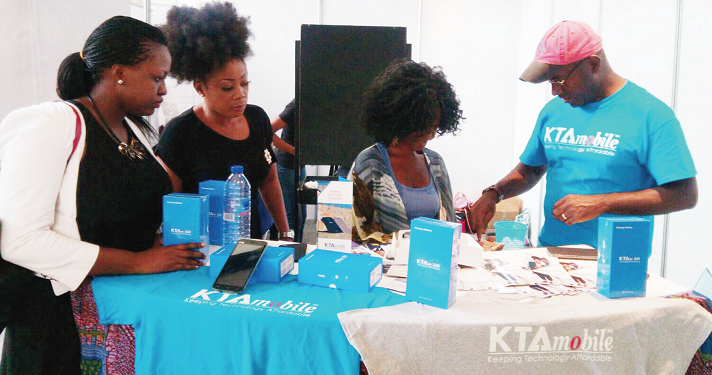 “We are driven to create products that make communications easier, better and cheaper for all. For these reasons, a significant amount of time is put into getting the right products to consumers. Our main focus is to design and develop efficient, user-friendly and affordable handsets that meet and exceed clients’ mobile life experiences.

This reflects our unique point of view, our passion and commitment to creating value for all,” he noted.

He added, "Our phones come unlocked with the android operating system advanced fingerprint security, dual-sim slots and 4GLTE. Besides, the phones are carefully built with longer battery life, have better storage, are faster, more efficient, have high definition display, clear video and audio, sharp vibrant cameras and advanced MediaTek chipsets beautifully housed in a sleek case for easy handling. We believe in pushing the limits, challenging the norms and offering the best mobile solutions for end-users in Ghana and the rest of the world.”

For Mr Twum-Ampofo, sharing knowledge and inspiration is equally important in our professional spheres.

It can foster vision in others and strengthen professional ties. When you share with others, it helps deepen your own knowledge and adds to what you know. New conversations and opportunities can arise just from that gesture, offering, even more, opportunities to grow.

“In Ghana, it is common to see children playing computer games or even engaging in online gambling at the internet cafes.

They have talents that can be productively channelled. “It is good to teach them basic computer programming, something my outfit intends to take up seriously as our social intervention activity,” he indicated.

In a nod to the Web 2:0 media environment, he observed that children were growing up in a very different world than that of their parents. Cellphones, computers, YouTube and Facebook are embedded in their daily lives. Even toys are digital and many are programmable.

“It’s one thing to know how to use these technologies. It’s another, however, to understand the logic behind them. When learning to programme, children understand and tinker with the digital world they inhabit. 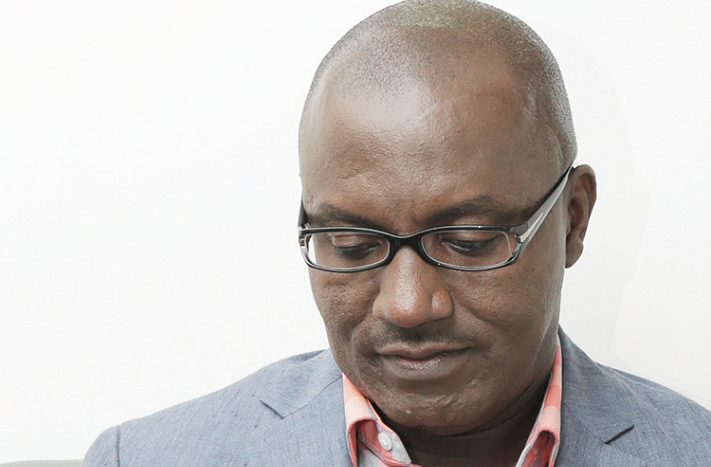 “Coding draws back the seeming ‘magic’ of technology so they can truly understand the logic and science that controls this technology–a discovery that is all the more magical.

“Our reliance on technology will only increase. Students of today must be able to not only passively consume this technology but also to understand and control it, becoming an active part of this huge digital shift,” he stated.

A graduate of Mercy College in Dobbs Ferry, New York with a Masters in Computer Security, Mr Twum-Ampofo brings over a decade of knowledge of Computer Forensics, Cyber Security,

Network Engineering and Data Communications in creating a reliable smartphone that puts security, safety, long battery life and speed at the forefront of its functionality.

He had his secondary education at the New Juabeng Secondary School in the Eastern Region and is married to Irene Asamoah Twum-Ampofo, with whom he has two children.