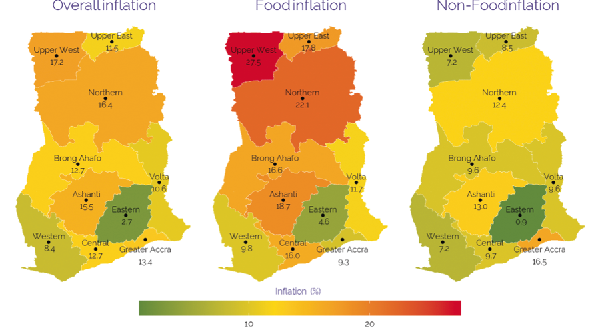 Inflation for November has hit 12.2 per cent, up from the 11 per cent recorded in October, Government Statistician, Professor Samuel Kobina Annim, has announced.

The figure is the highest inflation recorded in over four years when the economy recorded an inflation rate of 12.2 per cent in September 2017, and also the highest since rebasing in August 2019.

The main drivers of last month’s inflation rate was the housing, water, electricity, gas and other fuels sub sector which recorded the highest inflation rate of 20.5 per cent.

This was followed by the transport, the food and non-alcoholic beverages sub sectors which recorded inflation rates of 16 and 13.1 per cent, respectively.

The education services sub - sector recorded the lowest inflation rate of 0.7 per cent.

Commenting on how the high inflation would impact the economy, Prof. Annim said while inflation rate affected diverse economic variables, the Ghana Statistical Service (GSS) did not specifically indicate the extent to which it impacted the economy in its press releases because that was not the purpose.

“But rate of inflation, once it goes up, one would have to think about its impact on interest rates, overall vibrancy within the economy and one can even stretch the argument to look at its impact on exchange rate returns and other macro-economic variables.

Food inflation’s contribution to total inflation also increased from 44.9 per cent in October to 47.7 per cent November.

All the 15 food sub-classes recorded positive month-on-month inflation, with vegetables recording the highest of 3.8 per cent.

Non-food year-on-year inflation on the average also went up again in November, compared to October, from 11 to 11.6 per cent.