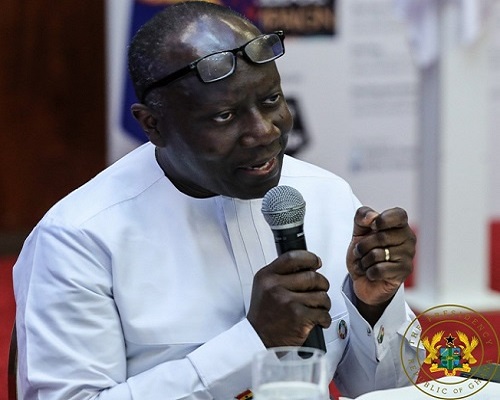 The government has suspended 20 percent expenditure in the 2022 Budget, the Minister of Finance, Mr Ken Ofori Atta has confirmed.

Parliament has already approved the government's total expenditure for 2022, but the government, in a prudent fiscal consolidation move, has decided to cut down on its expenditure, up to a whopping 20 percent.

Addressing the media on Wednesday, the Finance Minister said the expenditure management by the government, is expected to continue from this year and beyond, in the midst of the global impact of covid-19 on economies.

"To ensure that the government matches all expenditure to revenue inflows, all expenditure commitments in 2022 will be adjusted to match revenue collection," the Finance Minister announced.

"Therefore, in accordance with Section 25 of the Public Financial Management Act (PFMA) law, the quarterly expenditure ceilings of the approved budget will include up to a 20% downward adjustment, beginning in the first quarter of 2022, in commitments across board for all covered entities benefiting from the 2022 Budget, subject to revenue performance," the Minister of Finance, Ken Ofori Attah announced at a briefing.

The Minister said that this means that Ghana’s fiscal consolidation agenda is going to be primarily driven by the expenditure side with support from additional revenue. In this regard, projected revenues in the 2022 budget will only be spent when they materialize.

Following the impact of the pandemic on the economy, the latest bold step adds to government's announced fiscal consolidation strategies, which includes a focus on more internal revenue generation.

The government's projected expenditure for 2022, which has already been approved by Parliament was GHc135.6 billion.