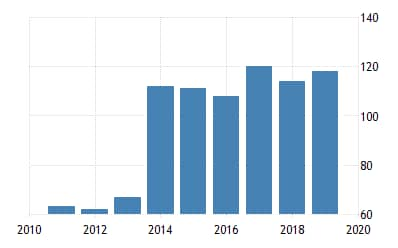 The World Bank Group has scrapped the publication of its Ease of Doing Business report, dashing Ghana's hopes of a higher score in the face of massive regulatory reforms in the business environment since 2019.

The country will now have to look to less renowned private sector-minded reports and rankings to sell its story to global investors on how initiatives introduced to streamline business registrations and land acquisitions, as well as guide companies through financial and operational difficulties have succeeded.

In 2019, the country dropped four places to the 118th position out of 190 countries surveyed and retained that spot in the 2020 edition of the publication, which assesses how countries facilitate or constrain business operations. The reports had cited insolvency resolutions, contract enforcements, tax payment, cross border trade and property registration by businesses as the constraints holding down the country’s ranking.

Consequently, the country looked forward to healthier scores in the next reports after rolling out the Business Regulatory Reform programme that saw the passage of the Companies Act, 2019 (Act 992), the Corporate Insolvency and Restructuring Act, 2020 (Act 1022) and the decoupling of the Register of Companies from the Registrar General’s Department.

Together with ongoing reforms meant to reduce the time and cost of complying with regulations, experts had tipped these initiatives to give the country a better score in the 2021 and subsequent reports.

That will, however, not happen as the WBG discontinued the publication on September 16 after investigations found that two former top officials had rigged data to favour China and Saudi Arabia in the 2018 and 2020 editions.

An external investigation into the processes leading to the publication of the 2018 and 2020 editions had found that the bank’s former President, Dr Jim Young Kim, and its former Chief Executive Officer (CEO) and current Managing Director of the International Monetary Fund (IMF), Dr Kristalina Georgieva, compromised data and processes to give China and Saudi Arabia healthier rankings in those editions.

The two executive officials have since denied any wrongdoing.

A Business Executive and Consultant, Mr Felix E. Addo, who played lead roles in some of the Ministry of Trade and Industry-led reforms, told the Graphic Business that the discontinuation of the publication was disappointing, given the expectations from Ghana.

“It's quite unfortunate; a little bit disappointing but we will carry on with the reforms. We had introduced massive reforms; the Companies Act, the Insolvency and Restructuring Act, the separation of the Register of Companies and the push to change the rules of court to fast track dispute resolutions for businesses were all meant to improve our business environment and ultimately, our score.”

“So, we expected a better score – a quantum leap from the 118 ranking – but that is fine. We will still carry on with the reforms because we need them to make our economy better,” Mr Addo, who was part of the committee of experts that championed the passage of the Companies Act as well as the Insolvency and Restructuring Act, said.

Mr Addo, who is the Council President of the Ghana Association of Risk and Insolvency Advisors (GARIA), said although his outfit had issues with some of the measurements of the Ease of Doing Business rankings, it remained a critical pointer to how countries were enhancing their environments to make businesses competitive, hence the expectations.

He, however, said it was quite unfortunate that the report by an astute institute such as the World Bank would be plagued by data integrity issues, leading to its demise but expressed the hope that a more credible measure would emerge to fill the void.

A Professor of Economics, Prof. Peter Quartey, said in a separate interview that the discontinuation of the report would create a gap in the business and economic research area.

He said the Ease of Doing Business rankings had grown to become the tool on how to assess the competitiveness of an economy in attracting and retaining investments and with it gone, countries such as Ghana would have to find credible alternatives to sell their story.

He advised the country to be deliberate in telling its story on the massive improvements in the business environment to help create awareness.

He also mentioned the African Development Bank (AfDB) and the Organisation for Economic Cooperation and Development as institutions whose reports on economies could be used to fill the void created.

Launched in 2002, the Ease of Doing Business report was the World Bank’s flagship publication and had become popular with investors and governments as a trusted gauge of how reforms were impacting the business environment.

It published 17 editions and each publication studied how regulations by governments had improved or constrained business operations.

It often covered 12 areas of business regulation, including starting a business, dealing with construction permits, getting electricity, registering property, getting credit, protecting minority investors, paying taxes and trading across borders.

The rest were enforcing contracts, resolving insolvency, regulation on employing workers and contracting with the government.

While the first 10 measures were included in the EBD rankings, the last two were not.

The higher a score, the more constraining a country’s economic environment was found to be to investors and businesses in general.