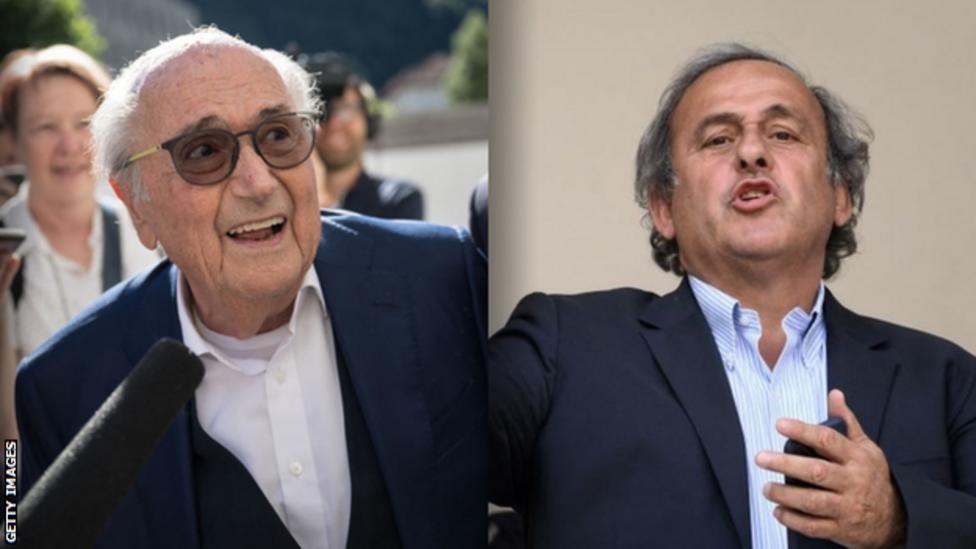 Former Fifa president Sepp Blatter and vice-president Michel Platini have both been found not guilty following their fraud trial in Switzerland.

Both men had denied wrongdoing and said the transfer was belated payment for Platini's advisory work for Fifa.

On his arrival at the court on Friday, Blatter said: "I am not innocent in my life but in this case I am innocent."

Blatter, 86, and former Uefa president Platini, 67, were banned from football in 2015 and indicted last November.

I won a first game - Platini

Following a case that was opened in 2015, their 11-day trial over the 2011 payment took place at the Federal Criminal Court in Bellinzona and concluded on 22 June.

"I wanted to express my happiness for all my loved ones that justice has finally been done after seven years of lies and manipulation," said Platini.

"The truth has come to light during this trial and I deeply thank the judges of the tribunal for the independence of their decision.

"I kept saying it - my fight is a fight against injustice. I won a first game.

"In this case, there are culprits who did not appear during this trial. Let them count on me, we will meet again because I will not give up and I will go all the way in my quest for truth."

Frenchman Platini had an illustrious playing career in football and is a three-time Ballon d'Or winner.

He captained France to victory at the 1984 European Championship and won the 1985 European Cup with Juventus.

Platini later went on to coach the French national team and became Uefa president in 2007.

When his own conduct was investigated by Fifa's ethics committee as part of a wider bid to root out corruption from the organisation, he stood down from the presidency of Uefa and was subsequently banned from football for eight years, though that was later reduced to four.

His appeal against the ban was rejected by the Court of Arbitration for Sport (Cas) in 2020.

"Believe me, going from being a legend of world soccer to a devil is very difficult, especially when it comes to you in a totally unfair way," added Platini.

Swiss businessman and sports administrator Blatter joined Fifa in 1975, became general secretary in 1981 and then president of world football's governing body in 1998.

He remained in the role for 17 years and, following an investigation by Fifa's ethics committee, received a ban from football for eight years - later reduced to six.

In 2021 he received a further six-year ban after the ethics committee investigated bonus payments.

Following the verdict, Blatter said: "[I am] relaxed, definitely, because during seven years I was always under pressure because there was a court case opened against me.

"Now its finished, so I am happy. I am also happy for international football.

What happened during the trial?

In his testimony during the trial, Blatter said he asked Platini to be his adviser when he was first appointed president of football's world governing body in 1998.

He said former France captain Platini wanted 1m Swiss francs (£816,030) per year but Blatter told him Fifa could not afford that fee.

"I knew when we started with Michel Platini that is not the total, and we would look at it later," Blatter had told the court during the trial, adding they shook hands on their "gentleman's agreement".

He added: "It was an agreement between two sportsmen. I found nothing wrong with that."

Platini said: "I trusted the president, and knew he would pay me one day."

Platini stopped working for Fifa in 2002 but did not pursue the payment until 2010, telling the court he had not needed the money at the time of his departure, when - according to Blatter - Fifa was in any case "broke".

However, Platini later heard that two former employees had received substantial payments and approached Fifa, who he said told him to send an invoice. He did so in January 2011, with the money paid 10 days later after approval by Blatter.

The Swiss Office of the Attorney General accused Blatter and Platini of "fraud, in the alternative of misappropriation, in the further alternative of criminal mismanagement as well as of forgery of a document".

Platini, who was also charged as an accomplice, said he felt the ban was a deliberate attempt to stop him from becoming Fifa president in 2015.

May 2015: Seven Fifa officials arrested on charges of racketeering, wire fraud and money laundering. A separate criminal investigation by Swiss authorities into how the 2018 and 2022 World Cups were allocated was also under way.

29 May, 2015: Blatter is elected for a fifth term as Fifa president in a vote overshadowed by arrests and corruption allegations.

2 June, 2015: Blatter announces he will resign, but will remain in charge until a special congress can choose a new leader.

July 2015: Platini, the president of Uefa, announces his intention to run as Fifa president.

24 September, 2015: Switzerland's Attorney General opens criminal proceedings for "unfair management" and "breach of trust" against Blatter. He is suspected of making "an unfair payment" in 2011 of two million Swiss Francs to Platini.

8 January, 2016: Platini withdraws his candidacy for the Fifa presidency.

24 February, 2016: The two suspensions are reduced to six years on appeal.

9 May, 2016: Platini's ban is cut from six to four years by the Court of Arbitration for Sport (Cas).

18 June, 2019: Platini is arrested in Paris in connection with a probe into the awarding of the 2022 World Cup to Qatar. Platini denied any wrongdoing and was released after questioning.

11 December, 2019: Fifa announces that it is taking legal action to obtain the reimbursement of the two million Swiss Francs paid "unduly" to Platini.

5 March, 2020: Platini loses an appeal to the European Court of Human Rights against his four-year ban.

1 September, 2020: Blatter is questioned by the Swiss attorney general's office over the payment to Platini.

2 November, 2020: Criminal proceedings in Switzerland open against Platini and Blatter for "fraud".