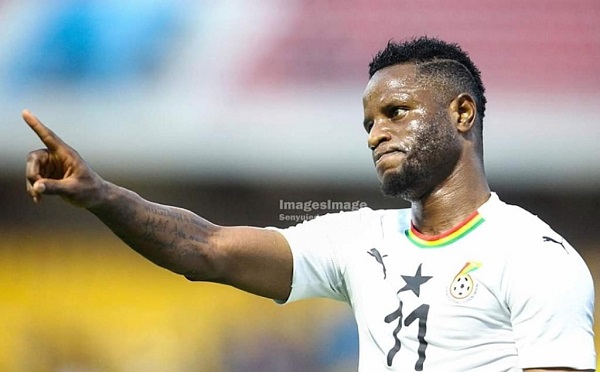 Mubarak Wakaso brings a lot of experience and steel to the national team's midfield
30.5k Shares

Mubarak Wakaso is one of the most outstanding senior players who featured for the Black Stars in the recent Japan 2022 Kirin Cup Tournament. However, he will be among the players who will compete for selection in Ghana’s final squad to the Qatar 2022 FIFA World Cup.

Having failed to be competitive at both club and national levels for sometime now due to injury, Wakaso’s fitness level has not only dropped considerably, but his stamina and speed which used to be his assets are also suspect now.

Based on his rich experience, the workaholic midfielder was considered among Coach Milovan Rajevac’s final squad for the Cameroun 2021 Africa Cup of Nations (AFCON) hoping he would recover in time from his injury. But alas, that dream did not materialise as he failed to kick a ball at the tournament, a situation which created a furore among football fans back home and eventually resulted in the sacking of team doctor, Baba Adam.

Wakaso’s inclusion in the Ghana team for the Kirin Cup in Japan from June 10 to 14, therefore, raised eyebrows, but his performance against Chile in the third place match seemed to have won the hearts of Ghanaians who were highly disappointed with the Cameroun incident.

With the 2021/22 season over and his fitness gradually improving, Wakaso, once considered as the engine in the Black Stars midfield, perhaps needs to focus more on his stamina and speed if he still hopes to be part of the Qatar 2022 World Cup campaign.

If experience was the sole criteria for selection, Wakaso could easily pass as one of the first players to be given the nod, but in modern football, fitness is key, hence the need for him to go the extra mile to prove his worth.

Now plying his trade in the Chinese Super League with Jiangsu Suning FC, the Tamale-born midfielder, who endeared himself to local fans right from the youth level, began his career with Obuasi-based Ashantigold in 2008, before being recruited by Elche CF of Spain for a five-year term.

The midfield dynamo spent a greater part of his professional career in Spain; from Elche to Villarreal, Espanyol, Las Palmas, Granada, and Alavés. He also played in Russia, Scotland, Greece, and ended up in China.

After signing for Elche, he was released in January 2011 to join Villarreal CF's B team. However, it was not until February 27, 2011, that Wakaso made his La Liga debut when he came on as a substitute for José Catalá in the dying minutes of a 2–2 draw away against Racing de Santander.

On July 11, 2012, Wakaso signed a four-year contract with RCD Espanyol, but moved to Russian Premier League side, FC Rubin Kazan, during the 2013 summer transfer window. From Russia, he joined Celtic on a season-long loan the following year.

On July 10, 2016, Wakaso signed a three-year contract in the Greece Super League with Panathinaikos FC where he distinguished himself as a midfield general.

However, his chequered professional career continued on February 1, 2017, when he was loaned to another Spanish top-flight side, Granada CF, where he scored his first goal for the club on March 1 to help his side to a 2–1 home win over Deportivo Alavés.

He was later transferred to the Chinese Super League side Jiangsu Suning FC on January 18, 2020, but on April 12, the following year, he moved on to Shenzhen FC in the same country after the former side was dissolved.

On the international scene, Wakaso first represented Ghana at the 2005 FIFA U-17 World Cup in Peru, where he played two matches at the group stage. But at the senior level, Wakaso scored his debut goal on November 14, 2012 in a friendly match with Cape Verde.

He, however, made his first competitive debut for Ghana in a 2013 Africa Cup of Nations qualifier against Malawi. He also made the squad that appeared at the 2013 AFCON in South Africa, netting the only goal in a group match against Mali through a penalty kick, before scoring a brace in the 2–0 quarter-final win over Cape Verde.

During the Brazil 2014 World Cup, Wakaso made his debut World Cup appearance on June 21 during the memorable 2–2 draw with the eventual champions, Germany.

On February 5, 2015, Wakaso netted the second goal in Ghana's 3–0 victory against Equatorial Guinea in the semi-finals of the 2015 Africa Cup of Nations to send Ghana to the final against Cote d’Ivoire. He also converted his kick during the penalty shootout in an eventual 9–8 loss to hand the trophy to their neighbours.