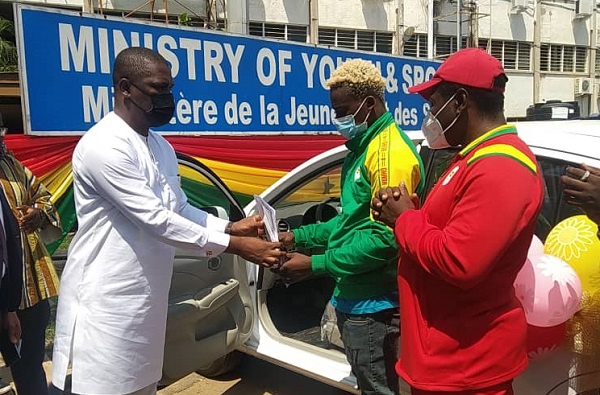 Takyi receiving his keys from the Minister of Youth and Sports

The government has rewarded members of Ghana's 2020 Olympic Games team with a total package of $150,000.

The package is in fulfilment of a pledge made by President Nana Addo Dankwa Akufo-Addo last August when he received the contingent at the Jubilee House upon their return from the Games in Tokyo, Japan.

Samuel Takyi, an amateur boxer with the boxing team who won Ghana a bronze medal for the first time since 1992 was presented with a $50,000 reward, comprising; the cedi equivalent of $10,000, a brand new Nissan Sunny Car valued at $20,000 and a further $20,000 for his professional and career development.

His other colleagues and coaches numbering 21 were also presented with the cedi equivalent of $5,000 each.