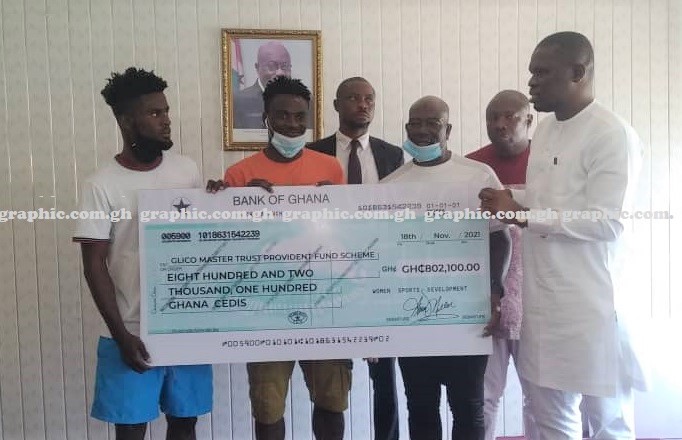 The government has instituted a provident fund scheme for the playing body of Ghana's victorious Black Satellites team which won the 2021 Africa U-20 Cup in Mauritania.

This follows a directive by President Nana Addo Akufo-Addo in May this year that 50% of their winning bonuses of $10,000 each be invested in the GLICO Pension Fund on behalf of the 26 players

This was disclosed on Thursday when the Minister of Youth and Sports, Mustapha Ussif on behalf of President Akufo-Addo presented a cheque for GHS802,100 to GLICO, the managers of the fund.

In an address at the ceremony, Mr Ussif said the Ministry decided to adopt a policy to invest a percentage winning bonuses of all matches played by the national teams following troubling reports of players turning paupers in retirement.

"In order to address this challenge, I had a discussion with the President, Nana Addo Dankwa Akufo-Addo, when the U-20 Team became the African Champions on how to present the Presidential Package," Mr Ussif said.

"The President directed that 50% of the winning bonus should be invested in the GLICO Pension Fund for the Team and come up with a policy to that effect. A draft policy was lodged at the Attorney-General's Department for advice. The Attorney-General approved of the policy and the Agreement was signed on 12th September 2021".

He said after the initial investment, the players were at liberty to contribute to the fund named 'GLICO MASTER TRUST PROVIDENT FUND SCHEME' whatever they wished from future bonuses.

The Greater Accra Football Association Chairman, Samuel Aboabire expressed gratitude to the President and the Ministry for the initiative, assuring that the players would be encouraged to make contributions to the fund.

The Black Satellites defeated the Hippos of Uganda 2-0 to win the competition.