Pandemonium at the Moshood Abiola Stadium: An unforgetable experience 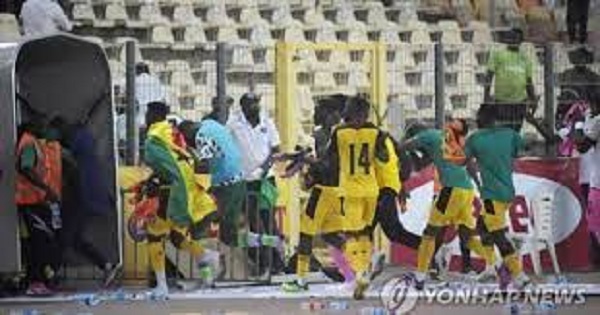 For the Ghanaian fans that travelled from Ghana to Abuja for last Tuesday's World Cup play-off second leg, the expectation must have been a memorable experience.

So when prayer was said on the flight asking for God's travelling mercies, as well as a peaceful and successful game, never did the about 120 Ghanaian fans and journalists on board the Asky aircraft ever envisage a chaotic end to a vintage Black Stars performance.

Therefore, it was with joy when after about an hour and half of take off the pilot's voice from the communication system came in clear directing passengers to fasten their seat belts as he began to descend into the airspace of Abuja. This, the entire passengers, most of who had been singing along the journey, wilfully obliged.

As we disembarked and checked into the yet-to-be-completed Nnamdi Azikiwe Airport for the immigration formalities, one could visibly see a country in high spirit ready to deny the Black Stars the opportunity to respond to the roll call at Qatar 2022.

Everywhere at the airport the confidence of Nigeria winning the game could virtually be touched as immigration staff and other passengers kept taunting the Ghanaian supporter with prediction favourable to the host.

It was obvious the spirit of the entire nation was rallying behind their team but the unbearable heat that welcomed us as we made our way out of the airport got me thinking whether our players could survive playing under this condition knowing very well they were all coming from European clubs where the weather was a bit cold at this time of the year.

Our journey out of the Abuja Airport to Ghana's High Commission was smooth except for the obvious noticeable costumes of some of the supporters which easily gave us out as visitors and supporters of the Black Stars.

On our way to the stadium little did we know that the heavy human and vehicular traffic heading towards the direction of the Moshood Abiola Stadium and shouting 'Ghana must go' on the sight of our bus was an indication of a hostile reception that awaited us.

Indeed, the Nigerian fans did not disappoint in creating that intimidating atmosphere at the stadium. Intermittently, without any provocation they will deliberately sprinkle water and throw empty bottles at the Black Stars supporters.

Gradually, this shameless act became intense after an army of supporters had overpowered the security and forced their way into the already filled-to-capacity stadium ignoring advice not to go near Black Stars supporters.

Every inch of space in the stadium was occupied by the Nigerian fans, including the alley meant for easy mobility.
Booing of Ghanaian players was one of the strategies they adopted and as if it was premeditated, the 60,000-capacity stadium erupted with a loud boo when the Black Stars emerged from the tunnel for the warm up and it continued anytime Ghana were in possession of the ball during the match.

Our ordeal started after Thomas Partey scored the opening goal. The deafening silence from the Nigerians was louder than the celebration from the Ghanaian fans which angered them to further throw water, pelt us with bottles and other objects.

This was supposed to be a warning signal to the police but they failed to act as they appeared more interested in the game than their duty at the stadium. Not even complaints from the Ghanaian supporters to the police would trigger any intervention because they knew they could easily be overwhelmed by the near double capacity of spectators at the stadium.

While they were at it, the Black Stars supporters remained unwavering only to be spared the ordeal when Nigeria got the equaliser. Perhaps that was to give the Ghanaians a brief respite.

About 10 minutes to full time when it was getting difficult for the Super Eagles to find the much needed goal, it started again when the Ghanaian fans were then subjected to fierce and rampant pelting of bottles and other objects.

They were rather irked by the Ghana team's decision to run towards the fans to show appreciation after the final whistle. At this point they were not spared either as the objects and water bottles flew from all directions. Soon an army of the disappointed home fans begun invading the pitch and the players had to quickly run towards the dressing room.

We had to run for our dear lives as they chased us on the pitch to the entrance of the tunnel kicking and throwing object at us from all angles in defiance of the many tear gas thrown at them until we disappeared into the tunnel.

Looking very exhausted we sort refuge in the uncomfortable and baking tunnel leading to the players' dressing room; we looked all soaked with sweat and where the effect of the tear gas begun manifesting in some fans began coughing repeatedly and spat out the burning sensation in their throat.

For over one and half hours, we were kept in the tunnel while the players were also locked up in the dressing room waiting for the fans to disperse to allow us to come out.

It was in the tunnel that we saw an ambulance and paramedic trying to resuscitate a collapsed official but rushing him to the hospital when their effort proved unsuccessful.

Knowing the electricity situation in Nigeria my worse fear was what would happen if power supply to the stadium was cut. Just when this was going through my mind the power went off leaving the entire tunnel dark but thankfully it was restored a few minutes later.

After going through this terrifying moment and standing for 90 minutes to watch the game and additional one and half hours in the very uncomfortable tunnel, we were ushered out into our buses.

With relief, we headed to the airport. This experience will forever remain indelible on my mind. Some of the supporters vowed never to step foot to Nigeria for any football competition.