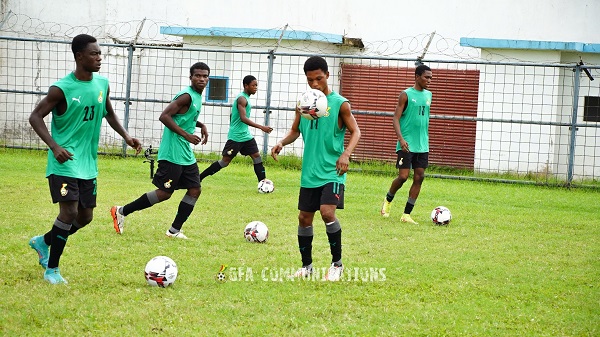 The Black Starlets bracing for their second game Follow @Graphicgh

Black Starlets coach, Paa Kwesi Fabin, says he will work hard to restore the confidence of his players and turn their fortunes around in the ongoing WAFU Zone B U-17 Cup of Nations after losing the opening match 2-4 to Nigeria.

The Starlets face a must-win game against Togo on June 17 if they are to revive their chances of qualifying from the group to the next stage of the competition and eventually book their tickets to the U-20 Africa Cup of Nations.

The Nigerians tore apart the hosts last Saturday, leaving the Ghana coach to rue their missed opportunity to start the competition on a flying note. However, he has blamed the team's poor outing against the Golden Eaglets to the massive clear-out of his players just three weeks ahead of the tournament after failing Magnetic Resonance Imaging (MRI).

Last month Coach Fabin was forced to raise an entirely new team after almost the entire players were disqualified for failing the MRI tests conducted under the supervision of CAF officials.

After the match, the Ghana coach kept his chin high and said there was still light at the end of the tunnel for his young team.
According to him the short time available at his disposal to raise a new team after axing the 20 players who failed the MRI must also be blamed since the time was too short to build any meaningful team to compete in a competition.

“The FA president instructed CAF to conduct a MRI test on the players and 20 out of the 23 players were disqualified so we had to use about three and half weeks to get this team,” Coach Fabin lamented.
According to him even though the team made a false start to the campaign they were going back to the drawing board to re-strategise and come back much better than before to win their subsequent games.

''Even though we lost I think the didn’t do too badly, I believe that we'll come back strongly.”
While praising the Golden Eaglets for winning the game he was of the firm opinion that it wasn’t a well deserving score line because his goalkeeper was awful on the day and virtually gifted the Nigerians three goals.

''They (Nigeria) are not a bad side but I think luck also smiled on them because like you saw, our goalkeeper gifted them three solid goals. I’ll say they are a good side but then luck also smiled on them and when you make such mistakes you get punished'', he noted.
Coach Fabin also blamed inexperience on the part of his players and was highly disappointed in the output of his goalkeeper which ensured a massive victory for the Nigerians, hoping that these mistakes could be corrected before their next game.

''We didn’t play our usual game and during our passing time, I thought the boys were a little bit jittery, and the keeper giving away balls and the Nigerians were better and we lost. I think our goalkeeper also didn’t help us much so we'll go back to the drawing board and see what to do,” he noted.