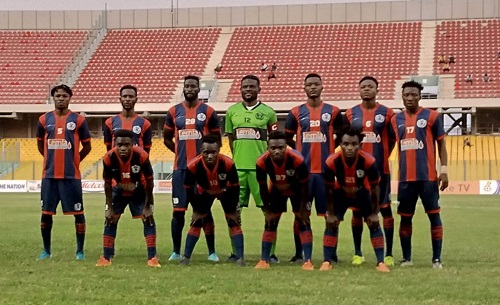 Legon Cities on Friday recorded their biggest victory in the Premier League this season with an emphatic 5-2 win over Ashgold at the Accra Sports Stadium.

Until this massive victory, the Royals had scored just three goals in their last nine games with only one goal coming from open play while the other two were from the penalty spot.

The win, however, was considered as one of the biggest comebacks in the local league as Coach Bashir Hayford’s charges twice came from behind to draw parity with the visitors in the first half.

Yaw Annor put the ‘Soccer Miners’ in front just six minutes into the game when he profited from goalkeeper Fatau Dauda’s howler to bury the ball into an empty net.

Three minutes later the hosts drew level, courtesy Nasiru Moro who scored a brilliant goal to cut short the celebration of the visitors.

Ashgold restored their lead in the 31st minute through Annor but the host fought to equalize just on the stroke of half time through Jonah Attuquaye.

Four minutes after recess Baba Mahama put the Royals ahead having connected beautifully with David Cudjoe.

Cudjoe would later turn from an assist to a scorer when he scored in the 52nd minute before putting the game beyond the reach of the visitors with a sublime finish 10 minutes later.

Ashgold’s quest to reduce the deficit was rewarded with a penalty but Annor missed the opportunity of scoring a hat-trick as goalkeeper Dauda saved his spot kick.

Later disaster struck the host as they were reduced to 10 men after their centre-back, Nicholas Mensah, was sent off for a cynical tackle but even with their numerical advantage, the ‘Miners’ could not reduce the deficit.