Kofi Abanga: My mother disowned me but I will still choose Hearts 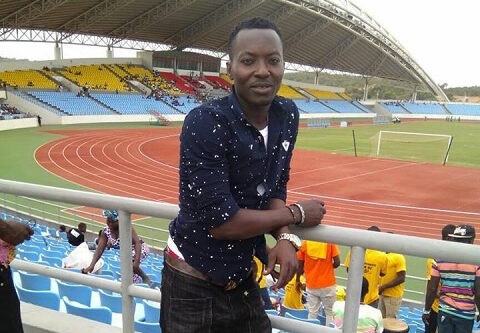 In June 2007, the exchange rate of the cedi started at GH¢0.92 to one US dollar, Ghana was preparing to host the African Cup of Nations in 2008, Sellas Tetteh was whittling down his squad for the U-17 Championship and West Ham's Carlos Tevez was being wooed by the two Manchester clubs in what would turn out to be the most interesting saga of the European transfer window.

However, in Ghana, a 19-year-old native of Tafo- Nhyiaeso, nicknamed Tevez by an ever-increasing horde of fans and media was hogging the headlines and relegating all challengers to the back pages.

Aduana Stars' Kofi Abanga 'Tevez' would go on to frustrate and captivate Ghanaian football fans over a tumultuous three months where his actions would appear like that of a damsel unsure of which of her suitors to choose.

Firstly, he would trial with the Phobians for two-weeks and star in their league coronation game against Dansoman-based Liberty Professionals which would lead to assurances of a contract by the club.

However, some indecision on the part of the Hearts management combined with a chance meeting with the supporters chief of Kotoko would conclude with Abanga signing a GHC 10,000 pre-contract agreement with the Porcupine Warriors and training for a month-and-a-half before having a change of heart in August 2007.

Unknown to many who accused him of indecision at the time, what appeared to be a tough decision to ditch Kotoko for the Phobians would also open a rift in the player's relationship with his mother Asibi.

Speaking to GraphicOnline 13 years after starring in perhaps the Ghana Premier League's biggest transfer story, Abanga says it was a no-brainer when the time came for him to choose between Hearts and Kotoko.

"Hearts gave me the platform, before I played in that Coronation match for them, I was not known nationally. There is no way I could have signed for Kotoko, Hearts made me Abanga Tevez,” Abanga told the Graphic Sports in a telephone interview.

Recounting the story of how he was scouted for trials with the Phobians, Abanga says the then Hearts coach Bulgarian Mitko Kostadinov Dobrev and Team Manager Sabahn Quaye were impressed with his performances during the trial.

"I was captain of Aduana in the First Division but two Hearts fans Mr Akoto of the Kumasi Metropolitan Assembly and the late Kwaku Adusei alias Kanawu facilitated my trials with Hearts in Cape Coast after they saw me in a community kick-about.

"At the time, Hearts were playing their final game of the season and that's how I met Dobrev and the team manager, Sabahn Quaye, they both aksed me to come to Accra for trials. I lived with Stephen Ofei when I went to Accra for trials, Sabahn (Quaye) told me I did well in the trials and I went on to play for both the U-20 and senior Hearts team during the Coronation game and that is how I went viral after putting up a good show".

Indeed, although he did not play in play a part in any of the games during their league games. Abanga was involved in the trophy celebrations and captured in the team celebration photos.

The player says this created the perception that he was a part of the Hearts set-up even though he was yet to put pen to paper.

"Sabahn and Tommy Okine said the club was interested and I would be offered a contract. In fact, they told me not to join any club but at the time there was some issues with the management".

It was the end of the season and all the Hearts players including his host Stephen Ofei had gone on holidays, so Abanga had no choice than to return to Kumasi where he was now a neighbourhood celebrity following his performance in the Coronation match.

"One day, I was jogging and some men including Circles Chairman, Kwadwo Nyantakyi who told me the then Kotoko Chairman Sylvester Asare Owusu wanted to see me. I met him at his residence at Santase and he told me he wants me to sign for Kotoko because I was a Kumasi boy.

"I entertained the Kotoko offer because I could not reach Sabahn who was on a national assignment with one of the national teams and also I had not heard from any Hearts officials although they had earlier assured me that they had met the Aduanahene".

Abanga says he led Kotoko on for some days till he was advised by the then Aduana CEO, Mr Kingsley Osei Bonsu alias Lord Zico to only sign a pre-contract for GHC 10,000 cash. Why? Because Lord Zico told him cheques always bounce in Ghanaian football transactions.

And when the money was presented to Abanga, it was a sight to behold for the 19-year-old: "Lord Zico told me not to accept a cheque, so when they made a pre-contract GHC 10,000 offer on a rainy day I told them I wanted the money in cash and not a cheque. The money was brought to me in a Ghana-must-go bag, in denominations of the new GHC 1. I had never seen such an amount of money in my life at that point, 100 million (before the redenomination)", Abanga recalls with laughter.

"I had not even reached home when I heard the story on radio that I had signed a three-year contract with Kotoko and once I had taken their money, it meant I had to start training on the next Monday".

Riding high in the company of Kotoko Chairman Sylvester Asare on the first day of training with the Porcupine Warriors, a cold reception by Kotoko coach Bashir Hayford at the training grounds would bring Abanga crashing back down to earth.

"On my first day, I went with Chairman who introduced me to Bash, a coach I had played under in the national under-17 set-up. Bash said he knew me and I was being overhyped, I was stunned by the comments and I knew I was in trouble.

"Bash (Bashir Hayford) asked, ‘is it Abanga you people are treating like Maradona?’ In a way, I understood him because Kotoko had a very good midfield at the time with the likes of Copson, Stephen Oduro and Edmund Owusu-Ansah. In training he treated me like an outsider, I was on the bench for the 11-a-side session but when I came on, I proved to him what the hype was about.

"On my way home, Chairman told me that was the first time he had watched me play and he was impressed. Kotoko signed me on a pre-contract based on supporters’ recommendations".

He says after his first training session, the bond between himself and the Chairman grew stronger as the latter became a firm favourite in his household after he pledged to buy a house for Abanga's mother, Asibi.

However, the pledge would never be redeemed and Asibi would disown her son after he denied her the gift of a house by signing with Accra Hearts of Oak.

"I trained with Kotoko for a month-and-a-half and we were about to head out for a training tour to Germany and Sudan. One day, I was asked to stop training because a letter had come from Aduana that I was still their player and Kotoko had no rights over me.

"Nana Agyemang Badu had come back from China and he could not reach me, this is because Kotoko had given me a new SIM card of their main sponsor while I trained with them. There was no way anybody could reach me".

According to the player, who was about to become the first Division One player to host a press conference from his home, the leadership of Kotoko advised him to hold the novel press briefing and publicly declare for Kotoko.

"The press conference was at my mother's house at Tafo Nhyiayeso, I did not know any pressman at the time. Kotoko invited all the pressmen and I was coached on how to beg Nana with tears for him to release me to them".

Abanga says because of his newfound celebrity he was appointed four bodyguards by Kotoko, the eagle-eyed quartet accompanied him wherever he went. He pleaded with Sylvester Asare to call-off the bodyguards because they were bringing him unwanted attention.

“I met Prince Omar, he is like an elder brother who took care of me when I was younger at Tafo. He asked me why I was letting people insult the Dormaahene and I accepted I was at fault because of my actions. Soon, I was in his car en-route to Asawase, not knowing that he had called some two radio presenters and when they arrived they convinced me to go to Accra and speak to Nana.

“I arrived at Nana’s house at Tema at 2 am and after we had swapped cars three times to evade Kotoko fans, the last car I sat in was driven by Nana Atuahene. Nana directed that the presenters be given a cow, they were very glad. He later asked me which team I would like to join. I told him it was Hearts but I had waited for a contract offer from them for long. He was pleased and told me he would return Kotoko’s signing-on fee, adding that my registration card was already at the Hearts Secretariat. I signed for Hearts on the next Monday”. 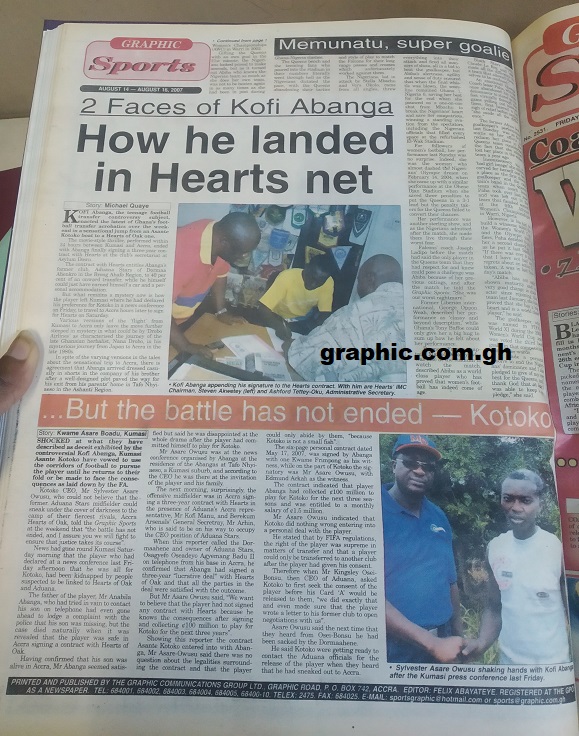 Abanga would join Hearts initially on a three-year contract with an attractive monthly salary of GHC 400 (GHC 250 more that Kotoko had offered him). In addition, the Aduana owner, a Hearts fan, would present him with a Golf3 vehicle as an added bonus for joining the Phobians. However, all was not well within his family.

“I cried the whole night because my mother told me I was no longer her son after the news broke. She was unhappy because of the relationship she had with the Kotoko Chairman who had promised to buy her a house. Some Kotoko fans also urged my father to file a police report that his son was missing but when I contacted my late father (Anabila Abanga) and explained everything to him he gave me his support and assured me that he would convince my mother who later apologized to me.”.

Abanga would go on to spend seven years with the Phobians, winning the Ghana Premier League in 2008/2009 season, the GHALCA Top 4 twice, the Homowo Cup and the President’s Cup.