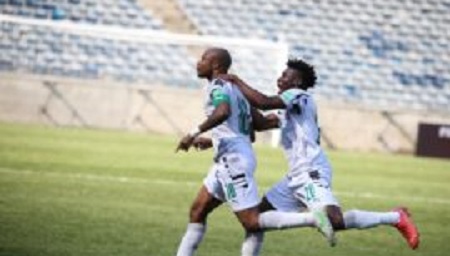 The outcome jeopardised Ghana’s chances of making it to the World Cup as the Black Stars need to beat the Bafana Bafana of South Africa by a wide margin in Cape Coast on Sunday to snatch the sole group slot to the playoffs.

Skipper Andre Ayew’s sublime free-kick on the 22nd minute put the Black Stars in front, while a sloppy defending by centre-back Joseph Aidoo 18 minutes to time enabled Kedebe Getaneh to break the hearts of Ghanaians with an equaliser.

As expected, the Stars looked more aggressive at the beginning of the exchanges and by the fifth minute, Andre Ayew and Kudus Mohammed, had forced a double save from goalkeeper Kekele Shimelis who punched the former’s effort into the path of the latter.

Determined to carry the day, the Stars continued to mount pressure on the Walias of Ethiopia until striker Richmond Boakye-Yiadom was fouled at the edge of the penalty box for Ayew to curl the ball over the human wall into the net.

Two minutes later, Kamal Deen Sulemana could have increased the tally when he virtually walked through the Ethiopia defence but watched in dismay as his shot flew over the crossbar. That was before Kudus’s drive from 25 yards had narrowly missed the target.

Ethiopia launched their own attack in the 30th minute following a miscommunication between Ghana’s centre-backs, Aidoo and Daniel Amartey, but goalkeeper Joojo Wollacott, who had been on holiday in the entire first half, was alert to deal with Hotessa Dawa’s free header.

Five minutes later, the Stars defence was once again breached after a sloppy play as the Ethiopians attacked from the flanks, but Wollacott used his sharp reflexes to deal with Getaneh’s goal-bound effort.

Just before recess, Ghana returned the fire with Baba Rahman racing down the left flank to locate Andy Yiadom in the box, but his Reading teammate ballooned the ball to the disappointment of the chanting Ghanaian fans in the stands.

Ghana looked sluggish after recess but made occasional threats into the Ethiopians half, including the 55th minute when a sweet combination between Jordan and Andre Ayew found Kamal Deen but he was a shade late to cause any havoc.

A minute later, the Stars defence leaked again as they gave away the ball, but the woodwork saved them the blushes as skipper Getaneh’s effort hit the top right corner of the post and bounced back into play, with Wollacott completely beaten.

The resilience of the Walias finally paid off in the 72nd minute when Aidoo gave away the ball for Getaneh to shoot past a helpless  Wollacott.