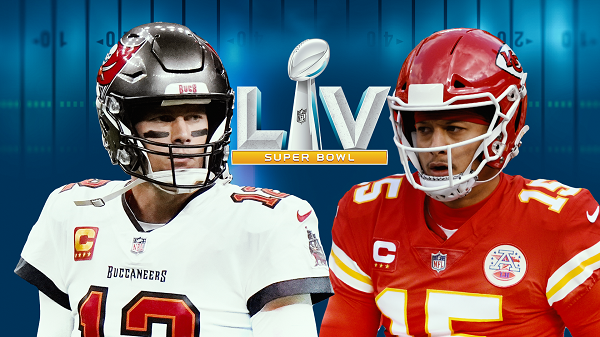 American football lovers can look forward to seeing one of the world’s greatest annual sporting events, the National Football League (NFL) Super Bowl, live on ESPN on Sunday February, 7 2021 from 11pm. DStv and GOtv is your home of the Entertainment and Sports Programming Network.

It will be held at the Raymond James Stadium in Tampa, Florida. This will be the fifth Super Bowl hosted by the Tampa area and the third held at this particular venue. It will also be the fourth time that the Super Bowl is played in the same state in back-to-back years, since Super Bowl LIV (54) took place at the Hard Rock Stadium in Miami, Florida in 2020.

Super Bowl LV will mark three milestones, as the Buccaneers will be the first team to play a Super Bowl in their home stadium, Tampa Bay quarterback and NFL legend Tom Brady will play in his record 10th Super Bowl, and Covid-19 health restrictions have limited the stadium capacity to 22,000 fans, which will make this the lowest attended Super Bowl in history.

Country music singer Eric Church will sing the United States national anthem prior to the match, while the half-time show will be headlined by Canadian singer, The Weeknd.

The Tampa Bay Buccaneers were long shots to reach the Super Bowl when the season started, but 43-year-old Brady has guided their team with an expert hand, throwing for three touchdowns and 280 yards in their upset 31-26 win over the Green Bay Packers in the NFC championship game.

"It's been a long process for the whole team, and today was just a great team effort," Brady said afterwards. The victory represented a stunning vindication of his decision to leave the Patriots in March last year after a glittering two-decade career in New England that yielded six Super Bowl wins.

Brady’s counterpart at the Kansas City Chiefs is Patrick Mahomes, with the 25-year-old considered the best of his generation of quarterbacks. In fact, the showdown between Brady and Mahomes is being compared to a hypothetical dream basketball scenario where Michael Jordan would take on LeBron James in the NBA finals to decide who is the greatest of all.

Visit www.dstv.com and www.gotvafrica.com to subscribe or upgrade, and join in on the excitement. And while you’re on the move, you can stream the action on DStv.