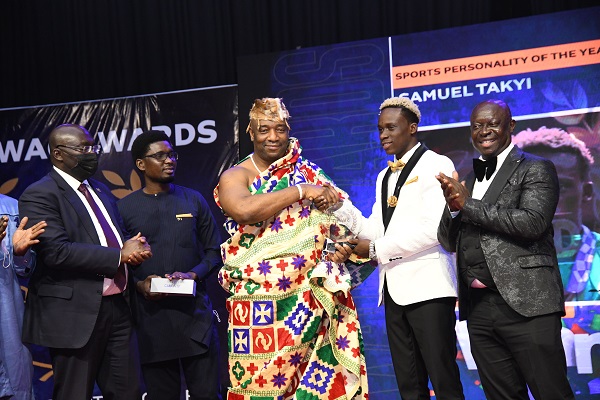 Olympic bronze medallist, Samuel Takyi, says he has joined the professional ranks with the ultimate aim to unify world titles in the future after a successful amateur career which saw him winning Ghana's only medal at the 2020 Tokyo Olympic Games.

The youngster believes he has what it takes to be successful as a professional boxer and become a world champion, with a pledge to
make the nation proud in the paid ranks.

Speaking after being crowned Sports Personality of the Year at the prestigious MTN Sports Writers Association of Ghana (SWAG) Awards at the Accra International Conference Centre last Friday, the 20-year-old asked Ghanaians to remember him in their prayers as he looked to make his professional debut soon.

“I want to thank everyone who supported me throughout my journey but I have decided to turn professional so I can go after my dream of becoming a world champion. The dream is to unify the featherweight division in the future and I want to promise Ghanaians that I won’t disappoint them,” Takyi stated after receiving SWAG’s flagship award from the Ga Mantse, Nii Tackie Teiko Tsuru II, in the presence of the Vice President, Dr Mahamudu Bawumia, who was the Distinguished Guest of Honour.

He again picked up the Boxer of the Year (Amateur) for ending Ghana’s 29-year Olympic medal drought in Tokyo.

In an address, Dr Bawumia called on sporting federations, especially football, to adopt digitisation in its dealings to help in raising funds for them.

He explained that the various football clubs could digitise match-day tickets to allow supporters access online which would prevent overcrowding at the various stadia.

“The world keeps changing and sporting federations, especially football, must adopt digital approach to help raise funds for the clubs.

“Ticketing is one of the various ways to apply digitisation and it will really prevent supporters from crowding at the stadium to purchase a ticket for a match,” Dr Bawumia explained.

The Ga Mantse, who doubles as President of the Ga Traditional Council, called on the government to ensure adequate preparation of athletes for the 2023 African Games to enable them to win more laurels for the state.

He called on the various stakeholders in sports to see to the revival of Inter-Schools and Colleges (INTERCO) sporting activities to serve as a hunting ground for talents as was the case in the past.

“The 2023 African Games is approaching and it is up to every stakeholder, especially government, to ensure our athletes are in good shape so they can win laurels for the state," said Nii Tackie Teiko Tsuru II.

“Previously, INTERCO used to be very effective in unearthing talents and that is what stakeholders must be looking at. It must be revived to help in the talent hunt,” he added.

In other awards, Takyi’s trainer at the Olympics, Kwasi Ofori Asare, was adjudged the National Team Coach of the Year, with Yusif Basigi of Hasaacas Ladies walking away with the Coach of the Year award.

Hasaacas Ladies captain, Janet Egyir, was adjudged Female Footballer of the Year after her role in the club winning five trophies and reaching the final of the maiden CAF Women’s Champions League. She received a trophy and GH¢10,000 donated by the Vice President.

Saddick Adams of Angel TV became the maiden winner of the SWAG Sports Journalist of the Year award and received GH¢10,000 donated by the Vice President  while Fatawu Issahaku became the Discovery of the Year.

Alfred Lamptey beat John Laryea and Mohammed Ayitey to win the Professional Boxer of the Year. Hasaacas Ladies were crowned Team of the Year and Mr George Lamptey finished as Administrator of the Year.