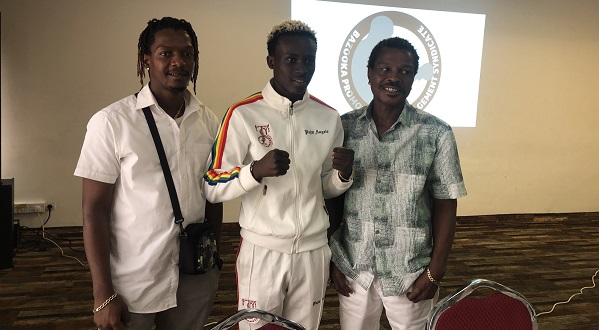 Ghana’s Olympic bronze medallist, Samuel Takyi, has described his relationship with trainer Ike ‘Bazooka’ Quartey as the best for his young career ahead of his pro debut on April 15.

Takyi, who is scheduled to face Kamalrudeen Boyefio on his debut, described the decision to sign with Bazooka Promotions and Management Syndicate as the ingredient needed to achieve his world title dreams.

The 21-year-old will enter the ring against Boyefio under the guidance of Quartey, a former World Boxing Association (WBA) welterweight champion.

Takyi believes that having Quartey in his corner would help him learn a lot from the legendary boxer who fought great boxers such as Oscar De La Hoya, Crisanto Espana and Fernando Vergas during his heyday.

“I made the biggest decision of my career and it is to be with one of Africa’s best boxers in Ike Quartey,” Takyi told the Graphic Sports.

“I believe it will definitely pay off in the end once Ike is leading me in my corner starting from my debut bout next month.”


Takyi and his team have decided to make his pro debut at super featherweight despite winning a bronze medal at the featherweight class during the Tokyo Olympics last year.

The talented boxer is considered one of the hottest boxing prospects in Africa following his stellar performance at the Olympic Games seven months ago.

When asked of his upcoming bout with Boyefio, Takyi said he was confident of an emphatic win against the journeyman.

“He is an experienced fighter and I am glad to be starting my professional journey with him.

“I am promising a good show and I believe I am going to win convincingly on the night.”