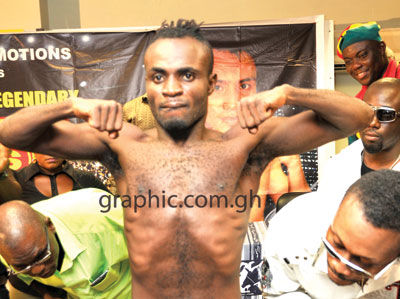 Unfamiliar with the Ghanaian culture, Pontillas remained calm during yesterday’s weigh-in, a sharp contrast to Tagoe who arrived with a  bus load of  vociferous  supporters.

However, any attempt to interpret his demeanour to mean meekness could cost Tagoe’s camp who are already brimming with confidence about this international bout, having successfully guided the boxer to beat hard-punching George Ashie late last year.

Philippines is one country which has produced world class boxers, including the great Manny Pacquiao who beat his Ghanaian counterpart, Joshua Clottey three years ago and is that same trail Pontillas intends to blaze in this evening’s bout.

The Filipino’s warning to stop Tagoe in the first round must not be taken as mere bluff because of his past record. Though Tagoe’s achievement is also impressive, he must tread cautiously to ensure his fans are not disappointed.

Michael Ansah and Abraham Osei Bonsu will complete the bill with a showdown for the national super featherweight title.