Why chiefs should not engage in partisan politics 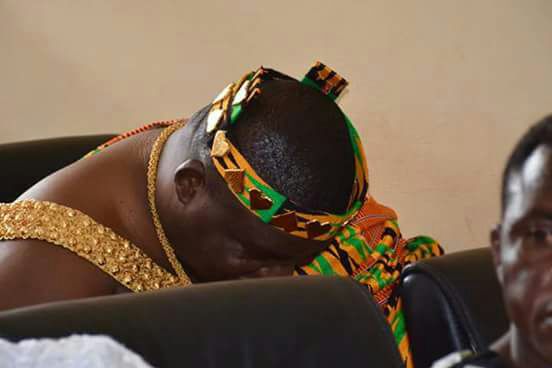 The campaign period during the Election 2016 and the aftermath following the election of Nana Addo Dankwa Akufo-Addo as President-elect has played up some of the reasons chiefs are not supposed to engage in active partisan politics as enshrined in Article 276 of the 1992 Constitution.

Section (1) of Article 276 states: “A chief shall not take part in active party politics; and any chief wishing to do so and seeking election to Parliament shall abdicate his stool or skin.”

Section (2) of the same article goes further to state: “Notwithstanding clause (1) of this article and paragraph (c) of clause (3) of Article 94 of this Constitution, a chief may be appointed to any public office for which he is otherwise qualified.”

However, some chiefs in the past have openly supported one political party or the other and urged their subjects to follow their footsteps.

Across the country during the 2016 campaign, some chiefs openly declared their support for the New Patriotic Party’s (NPP’s) candidate, Nana Akufo-Addo or President John Dramani Mahama of the National Democratic Congress (NDC).

They included the Gbese Mantse, Nii Ayi Bonte, the Dormaahene, Oseadeeyo Agyeman Badu II, the Paramount Chief of Sunyani, Nana Bosoma Asor Nkrawiri, among a host of others who openly declared support for President Mahama.

The Asantehene, Otumfuo Osei Tutu II, for instance on a number of occasions came out to remind chiefs of their constitutional mandate and urged them to desist from publicly pronouncing their preferences.

The Asantehene specifically cautioned chiefs in the Asante Kingdom to abdicate in line with the Constitution if they wanted to engage in partisan politics, otherwise they should abstain or he would be forced to destool them.

On social media, the examples of the Gbese Mantse, Nii Ayi Bonte, and the Dormaahene, Oseadeeyo Agyeman Badu II, have come up for mockery after the election following what they said in their endorsements and the election results pointing the other direction.

Videos of their pronouncements openly declaring support for President Mahama ahead of the other presidential candidates have been shared several times on Facebook and on Whatsapp.

The Gbese Mantse, Nii Ayi Bonte, in his case at the inauguration of the Accra Faecal Treatment Plant on November 25, 2016, showered praises on President Mahama.

Speaking in the Ga language, he went ahead to state that victory belonged to “Us [NDC] already by the time the election results are declared”.

“I am telling all of you we [NDC] will turn Ghana upside down in celebration. If victory doesn’t come for us [NDC], I Ayi Bonte will abdicate. I am telling you, we will defeat them,” Nii Ayi Bonte stated.

“I am telling all Gas by 5am we [NDC] should all be in the line so that we can move forward,” he added.

For his part, the Dormaahene, Oseadeeyo Agyeman Badu II, who doubles as a High Court Judge, in endorsing President Mahama on December 5, 2016, said the President had embarked on infrastructure projects more than any other Ghanaian President in history.

He said he would turn himself into a radio “serial caller” and challenge anyone who would state that President Mahama had not worked more than his competitors.

In barring chiefs from engaging in partisan politics, the framers of the Constitution took into consideration the unique role of chiefs in accordance with relevant customary laws as well as serving as symbols of cohesion, national unity and as the bonding agents of citizens across the country.

The declaration of the NPP’s Nana Akufo-Addo as winner of the Presidential Election by the Electoral Commission (EC) with 53 per cent of the votes as against President Mahama’s 44 per cent has left a sour taste in the mouths of some of the chiefs.

For instance, the Gbese Mantse was on Tuesday captured at the Greater Accra Regional House of Chiefs meeting at Dodowa trying to evade camera lenses and thus avoid being noticed by Nana Addo or catching his eye when the president-elect called on the chiefs.

Nana Akufo-Addo had entered the meeting to thank the chiefs for their support in the elections but the Gbese Mantse who had promised to de-stool himself should President Mahama lose was seen in photographs doing all he could to hide. 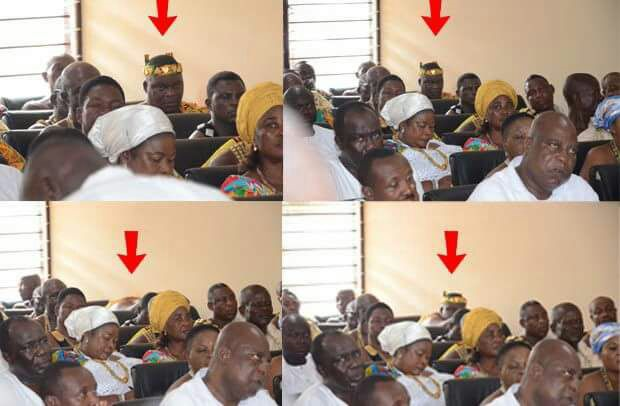 In a radio discussion programme on Peace FM Wednesday morning, the Editor-in-Chief of the New Crusading Newspaper, Abdul Malik Kweku Baako, for instance stated that Nii Ayi Bonte, displayed “total lack of wisdom” when he said he would abdicate his stool if President Mahama lost the 2016 election.

“This morning, I watched something on Metro TV which I’m happy about and laughed throughout. The Gbese Mantse, my own friend in football because we both support Accra Hearts of Oak, they replayed his video and when he was called on phone today he said he was not granting interviews.”

“He has also vamoosed into a rat hole… Do you see the point we were making that it was unwise for chiefs to put themselves in that partisan way and some of them went to the extreme?

“Now you went to sit at a durbar, a public space, and pledged to abdicate if one party loses. Why would you make such a pledge? This is total lack of wisdom and wisdom is a key attribute of chiefs or chieftaincy; it’s a requirement.”

“When we were saying (it), they didn’t listen. You have somebody who consistently engages in political buffoonery out there insulting our intelligence. Today, the chief has been disgraced, he is hiding in a hole and when he is called, he says: ‘I’m not granting interviews.’ They should drag him out of the hole and put the microphone right in front of him to talk so we can listen,” Mr Baako said.

He added: “Now, all the other chiefs who are listening, do you see the wisdom in the point we were making? What control does the chief have over his subjects who vote in secrecy?

Concluding, he said that should tell people the wisdom…in the constitutional injunction that chiefs ought not to play an active role in active party politics.

At the height of the endorsements of presidential candidates during the campaign, the Minister for Chieftaincy, Dr Seidu Danaa, for instance came out to advise chiefs to stay out of politics based on its unconstitutionality but that was ignored.

Chiefs and the authority they carry have profound respect no matter how small their domain is, to the extent that any moral offence committed by a chief or a person with such intentions automatically renders one incapable of holding such title.

The Gbese Mantse, Nii Ayi Bonte speaking at the inauguration of the Accra Faecal Treatment Plant

The functions and roles of politicians and chiefs are inextricably linked at the local governance level, a partnership that should promote socio-economic development of areas that fall under their jurisdiction.

There may be nothing wrong if a chief decides to applaud a president or government in public because chiefs and the local assembly are to liaise to promote the development agenda of their communities.

When the chief goes to the extreme with outright partisan political pronouncements, then it becomes problematic and rather renders the chieftaincy institution a meaningless one.

Some have attributed it to greed or the corruption of the moral fibre that is implicitly binding on the chieftaincy institution.

Some chiefs rather than initiate and promote development programmes have found a way to make political capital out of titles at the expense of community development and general progress.

In as much as the relationship between chiefs and politicians can’t be eliminated, we should recognise the broader conception of chieftaincy, the purpose the institution serves and infuse the values in future political engagements.

Consequently, such engagements that exist between government and citizens should focus on local development initiatives in communities that are lacking in development and for thriving ones to make better progress.