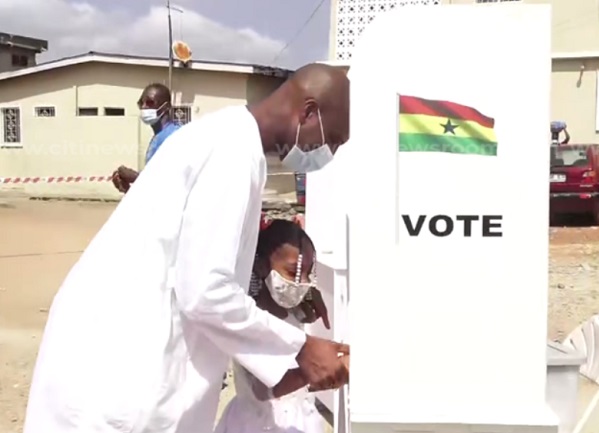 The Member of Parliament for the Asawase Constituency, Alhaji Mohammed Muntaka Mubarak has justified allowing his six-year-old to thumbprint his ballot paper in the ongoing elections.

Alhaji Muntaka in an interview after he guided his six-year-old daughter to thumbprint his ballot paper in the full glare of the electoral officers and media at the polling centre said he was just taking his daughter through the process of casting a ballot.

“If you see her, she’s only six years old. She doesn’t even understand what’s going on. I raised her thumb and did the thumbprinting; it was virtually me doing it. If I had given it to her, she would not have even known what to do. She’s my princess and I came with her during the last elections. I’m just taking her through the process”, Alhaji Muntaka said in an interview with Citi FM

Alhaji Muntaka, the incumbent, said he was hopeful he will be retained as MP by the people of Asawase.

“I am very confident that whatever happens, democracy will be victorious today. So far, all of us have seen that the process is going on smoothly. Everything is calm because every polling station started well. I have taken updates from my reps from all the 206 polling stations in the constituency and everything is cool. I have no doubt on my mind that the people of Asawase are going to retain me. I am super confident that the people are going to retain me at the end of the day”, he said.

Alhaji Muntaka is being contested by the NPP’s Alhaji Alidu Seidu in this year's poll.