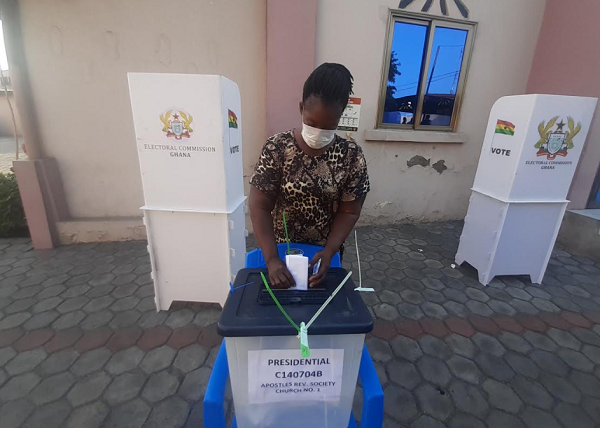 Voting is ongoing smoothly at the Odododiodio constituency in the Greater Accra Region.

Voting started at most of the polling stations visited by the Graphic Online at exactly 7 am.

At the Accra Royal Boys Number 1A polling centre, 156 persons out of the 755 excepted voters had cast their votes.

The Presiding Officer of the polling station, Bright Amoabeng commended the electorate for following the needed regulations.

He said they had not encountered any challengers as at the time of speaking to Graphic Online at 8 am.

In an interview with the Graphic Online, the Presiding Officer of the Sacred Heart Catholic SHS, Emelia Brobbey said the centre has not recorded any incident.

She said they are looking forward to 697 people to cast their votes, adding that the turnout is high.

The polling station is of the centres that followed the COVID 19 protocol of wearing the face mask, washing of hands as well as social distancing in the constituency.

“We are observing the COVID protocol and the place is peaceful, we don’t have any violence, no misunderstanding, nothing, the place is quiet”, she said.

At the Old Accra High Polling centre 1A, the Presiding Officer, Felix Commey said the total number of voters at the polling station is 441, out of which 45 persons had voted as a 9: 40 am, “The line has been okay. The voters have been clam, everything is okay as at now”.

He, however, said they had a problem with the machine in the morning but it had been resolved.

Secondly, he said they were supposed to have a Covid 19 ambassador at the centre, but the person has not reported as at the time of speaking to Graphic Online.

This, he said has paved way for people to disregard the covid 19 protocol, “ He did not show up so I am controlling the line, controlling my members and looking out for other things so we are short of one staff”

Over 1200 people are expected to vote at the three polling centres at the Christian Mboa Kuw.

The Presiding Officer for ARS polling centre 3, Stephen Arkason urged the electorate to continue to maintain peace and order at the polling centres.

He was of the view that although Odododiodio has been named as a hotspot, so far voters have been sober.

“Unlike other years, now they leave the centre after they have cast their votes. There is also no chaos here. We pray it will be same by closed of the day”, he said.

Speaking to the Graphic Online, the Presiding Officer for City Engineer 1A, George Mensah said 168 people had cast their votes out of the 610 persons expected to vote.

He said although there was a misunderstanding among the crowds in the morning, the security agents around were able to calm down nerves, hence there is order at the centre.

For her part, a voter, Peace Audi said she has voted to retain president Akufo-Addo in power. She said her daughter benefited from the Free SHS policy hence she wants him to continue with his good works.

Another voter, William Martey said he wants a change in power because of the challenges he has gone faced under the Akufo- Addo led government.

Godwin Authur who cast his vote at the Akoto Lante school polling centre on his part, said he is satisfied with the electoral process, ”there was no queue when I got there. We had to wash our hands and follow all the covid protocols and we were given the ballot papers to cast our votes. I am really satisfied with the process”.