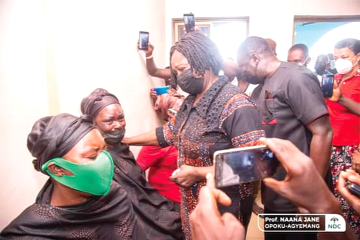 Prof. Naana Jane Opoku-Agyemang, the 2020 Running mate of the NDC presidential candidate, interacting with one of the bereaved families Follow @Graphicgh

A delegation from the opposition National Democratic Congress (NDC) led by the 2020 running mate to the presidential candidate, Professor Naana Jane Opoku-Agyemang, has paid a visit to Apam to commiserate with the families of the 13 children who drowned at the Apam beach last week.

The team included all the 13 NDC Members of Parliament (MPs) in the Central Region.

The delegation also included the Central Regional Executive of the NDC in the persons of Mr Kojo Quansah, the Secretary; Mr Theophilus Aidoo- Mensah, the Vice Chairman and Ms Faustina Lamptey, the Women’s Organiser.

On behalf of former President John Dramani Mahama, Prof. Opoku-Agyemang presented GH¢10,000 in support of the bereaved families and an additional GH¢6,000 to the Apam Fishermen Council in support of traditional rites to be performed before the burial of the children tomorrow.

Speaking during the visit, Prof. Opoku-Agyemang expressed President Mahama’s condolences to the bereaved families for their loss.

She noted that it was difficult for them to come to terms with it due to the tragic nature and urged them to leave it to God.

“I know you currently find yourselves in a difficult moment due to the painful loss of your children through a tragic incident,” she said.

“I, therefore, urge you to put yourselves together at this crucial moment so as to concentrate on the arrangements for a proper burial,” Prof. Opoku-Agyemang said.

She noted that the donation to them and the chiefs was to support the funeral arrangements as well as clear the way for the children to be given a befitting burial to bring finality to the tragic incident.

She used the occasion to admonish the fishermen council and parents to ensure that children are prevented from the beaches to prevent a similar future occurrence.

The MP for the area, Mr Gyan-Mensah, commended Ghanaians and well-wishers for their show of solidarity and support and added that was a great consolation to the families.

He particularly commended former President Mahama, colleague MPs and the government for their financial support towards the burial of the children.

Family members, who were present in an interview, thanked former President Mahama and the NDC for coming to their aid as they mourn the passing of their departed children.