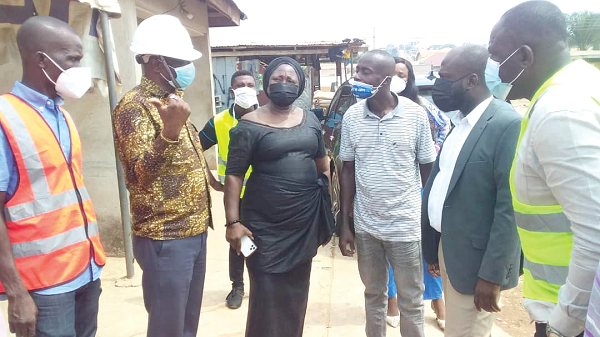 The Member of Parliament for Asokwa, Ms Patricia Appiagyei, has assured the people of Asokwa that ongoing road projects within the municipality were not to deceive them for votes but a deliberate programme of the government for the municipality.

She said many were those who thought that the projects were to hoodwink the residents to vote for the party and later abandon the projects.

That, according to her, was not the case and assured them that the roads would be completed latest by the third quarter of this year.

Ms Appiagyei was speaking to the media after inspecting some ongoing road projects within the municipality in the company of the Asokwa Municipal Chief Executive, Mr Akwannuasah Gyimah.

She said the municipality was benefiting from a total of 11.3 kilometres of road network which is ongoing and spread throughout the 12 electoral areas in the Asokwa Constituency.

She said apart from the ongoing 11.3 km road network, the municipality would also benefit from another 9.6 km road network under Sinohydro Project and other Government of Ghana (GoG) projects.

The tour was to reassure the people that the project would be completed for their benefits.

Currently, the contractor, Contracta Ghana Limited, is laying the culvert along the roads.

Ms Appiagyei appealed to residents to have patience and support the ruling party and assured them that they would have their fair share of the development.

She said there were lots of projects on the drawing board for the municipality and that at the right time, those projects would be implemented.

For his part, Mr Gyimah expressed satisfaction at the pace of work done so far and was hopeful that the contractors would deliver the project on time.

He also appealed to the people to have trust in the current government as the New Patriotic Party (NPP) “is not a deceitful government. Continue to trust us and support the President and his government to deliver”.

The Resident Engineer on the project, Mr Ofori Boamah, said the project would be completed within schedule.

According to him, the project was awarded in December 2020 and was expected to be completed by February 2022.

However, he said it would be possible to complete by September 2021.