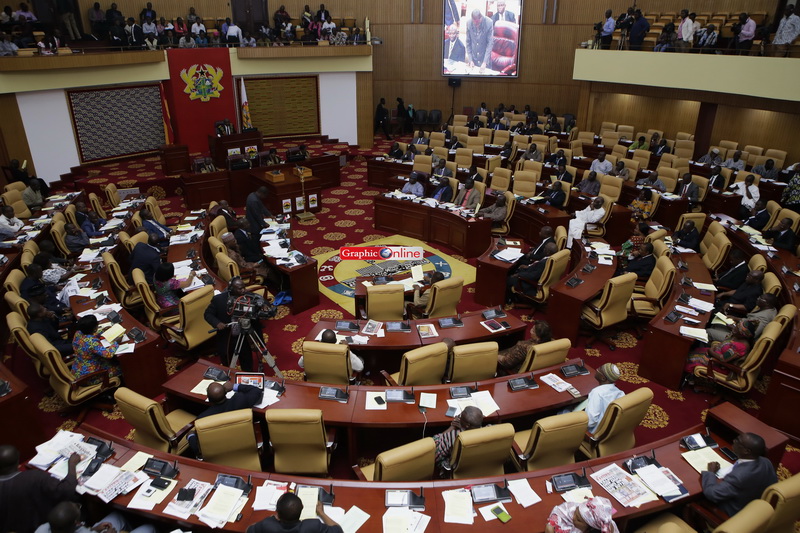 The Minority in Parliament yesterday abstained from participating in the business of Parliament.

Although the Minority Members of Parliament (MPs) were in the House, they did not contribute to the motions moved or vote.

The Minority Chief Whip, Alhaji Mohammed-Mubarak Muntaka, told journalists that the Minority MPs took the decision because of the insults that the Majority Leader, Mr Osei Kyei-Mensah-Bonsu, had hurled at them while contributing to the debate on the cash-for-seats report in the House last Tuesday.

He said Mr Kyei-Mensah-Bonsu and other Majority members who had contributed to the debate had "virtually insulted" the Minority members.

Therefore, Alhaji Muntaka said, the Minority MPs decided to just come and sit down and only watch the Majority side conduct the business of the House.

He noted that he was unable to tell when the Minority MPs would resume participation in the business of the House.

At a press conference by the Minority last Tuesday, the Minority Leader, Mr Haruna Iddrisu, had said Mr Kyei-Mensah-Bonsu had used insulting words against Minority members.

He said Mr Kyei-Mensah-Bonsu did not have monopoly over insults and indicated that at the appropriate time he (the Minority Leader) would reply him.

Reacting to the concern of the Minority members, Mr Kyei-Mensah-Bonsu denied using insulting language against the Minority MPs.

He said he only referred to the conduct of Alhaji Muntaka and the MP for North Tongu, Mr Samuel Okudzeto Ablakwa, who had moved and seconded the motion for investigations into the cash-for-seats saga.

Mr Kyei-Mensah-Bonsu said he only stated that the conduct of the two in relation to the documents they provided at the committee sittings was dishonourable and dishonest.

He said given the turn of events with the investigations, he was ready to repeat the use of the words ‘dishonourable’ and ‘dishonest’ to describe the conduct of the two.

On the abstention of Minority MPs from participating in the business of the House, the Majority Leader said it had not been communicated to him officially but he had observed it.

He said it was within the right of the Minority MPs to abstain, stressing that "you cannot force any member to participate".

However, he said, per the Standing Orders of Parliament, if a member stayed out beyond a certain time, that member could be referred to the Privileges Committee of Parliament.

On December 29, 2017, the Minority, led by Alhaji Muntaka, filed a motion calling for investigations into the levy and collection by the Ministry of Trade and Industry of the Ghana cedi equivalent of various sums of money in US dollars from expatriate businesses and related matters at the Ghana Expatriate Business Awards (GEBA) event.

Consequently, the Speaker of Parliament, Professor Aaron Mike Oquaye, directed the formation of a committee after a debate over a motion on the subject matter moved by Alhaji Muntaka at an emergency sitting of Parliament.

The allegation was that the Ministry of Trade and Industry was involved in the collection of between $15,000 and $100,000 from expatriate businesses to secure them seats at the table of President Nana Addo Dankwa Akufo-Addo at the GEBA in Accra on December 8, 2017.

The five-member special ad hoc committee that investigated the allegation concluded that there were no adverse findings against the Minister of Trade and Industry, Mr Alan Kyerematen, officials of the ministry and managers of the Millennium Excellence Foundation (MEF), organisers of the awards.

Consequently, Parliament last Tuesday exonerated the officials from wrongdoing in the cash-for-seats saga.

But the Minority MPs walked out of Parliament before the reading and adoption of the report of the committee.