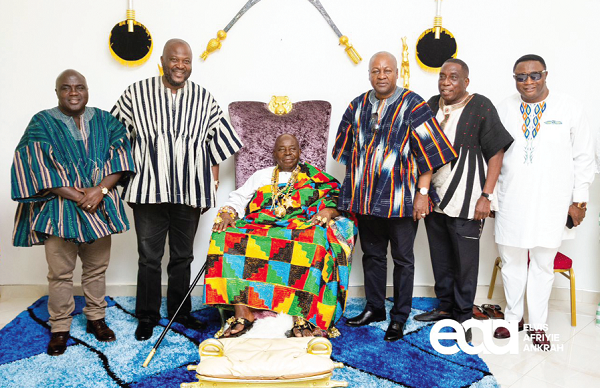 Former President John Dramani Mahama last Friday called on the Awoamefia of Anlo, Togbi Sri III, in Anloga in the Volta Region to pay homage as part of the Hogbetsotose Za.

The former President, who said he could not attend the grand durbar to climax the week-long festival of the chiefs and people of Anlo as a result of another engagement last Saturday, said his visit was to wish the Awoamefia a joyous celebration.

He said his visit was also to contribute towards the festival and expressed the hope to be present at next year’s festival.

Mr Mahama, who received a rousing welcome from some residents of the area and supporters of the NDC, later addressed them by urging the people not to lose hope in the face of the current economic hardships that had made life difficult for Ghanaians.


“I know things are very hard in Ghana today but I urge you not to lose hope”, he said.

Former President Mahama said the current government had learnt some lessons, saying when the NDC was in government they thought things were easy.

“They did not know what it was like to handle a country like Ghana. Today they have learnt their lessons so do not lose hope,” Mr Mahama told the cheering crowd.

“I am sure the people of Ghana have seen the difference between the NDC and the current administration and that in 2024 they will return NDC back to come and continue the good work,” Mr Mahama said.