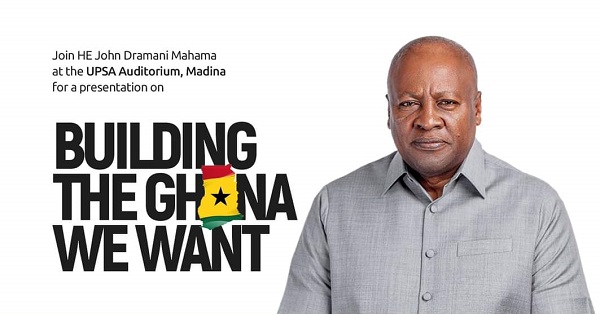 Former President, John Dramani Mahama will on Thursday, October 27, 2022, address the nation on the current economic challenges facing the country.

The presentation, slated for 7 pm at the UPSA Auditorium, Madina is titled "BUILDING THE GHANA WE WANT".

In an earlier tweet yesterday, an aide to the former president, Joyce Bawa Mogtari also suggested that Mr Mahama's presentation will suggest some solutions to the economic challenges.

“John Mahama speaks on Ghana’s collapsed economy and the unprecedented hardships sweeping across the land and the way forward on Thursday 27th October at 7pm,” she tweeted.

Figures from the Ghana Statistical Service indicate that Ghana's inflation soared to a record 37.2% in September from 33.9% in August, with food as a major driver.


Additionally, the country's currency has assumed a free fall against the dollar with a dollar selling at around 14 cedis, a situation that has sparked public hue and cry, especially among traders.

Ghana is hoping to receive as much as $3 billion under an International Monetary Fund (IMF) extended credit facility program to bolster its finances and regain access to global capital markets.

Meanwhile, President Nana Addo Dankwa Akufo-Addo has assured that the country will soon emerge from the current economic crisis.

He said the New Patriotic Party (NPP) had a track record of always taking the country out of its economic difficulties and that this time would not be any different.

The president said this when he addressed members of the party at the launch of a new NPP Identification Card for the party in Kumasi last Tuesday as part of activities marking his four-day tour to the Ashanti Region.

According to him when the country’s economy was in bad shape in the year 2000, forcing President John Agyekum Kufuor to opt for the Heavily Indebted Poor Country Initiative (HIPIC), “it was the same NPP government that got the country out of HIPC.”

He said when the NPP again took over the management of the country in 2017, it got the country out of International Monetary Fund conditionalities.

He thus called on the party faithful to trust the government to again get the country out of the current situation.