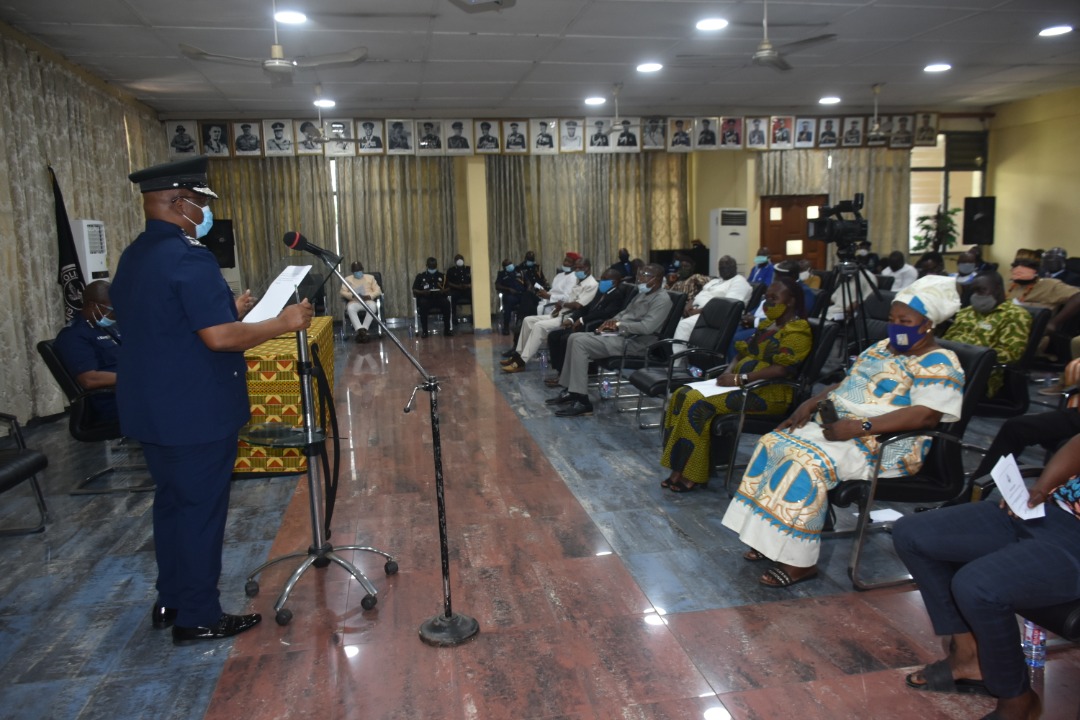 Mr Oppong-Boanuh speaking during the meeting with representatives of the political parties
30.5k Shares

The police have assured political parties of even-handedness in the discharge of their duty in relation to the upcoming general election.

The Inspector General of Police, James Oppong-Boanuh, said the police, as the lead internal security organisation mandated to maintain law and order would discharge their duty without fear or favour.

“We shall preserve the sanctity of the forthcoming election to ensure that lives and property are protected before, during and after the elections,” he said.

The IGP said this in Accra yesterday when the police met the various political parties to discuss a collaborative plan to minimise the chances of violence during the upcoming general election.

Attended by some very weighty names in the major political parties, the meeting highlighted the role of political parties and the police in ensuring that the December 2020 presidential and parliamentary elections were free, fair and transparent.

Mr Oppong-Boanuh described the upcoming elections as a crucial national assignment and described political parties as key stakeholders who had a crucial role to ensure the elections were successful.

He, therefore, urged political parties to help prevent incidents such as snatching of ballot boxes, intimidation of voters, attacking of electoral officials and the destruction of electoral materials during the polls.

“Any person or group of persons found to be engaged in such criminal acts would be arrested and prosecuted in line with the laws of the land,” he said.

The IGP entreated political parties to follow the legal processes in seeking redress to their electoral grievances in order to avoid unnecessary confrontation with the police.
Ghana, he said, had over the years been commended as a model of democracy throughout the world having successfully held elections since adopting democratic governance in 1992.

He urged all political parties, civil society organisations and the media to contribute their quota to educate the public and advocate for peace to ensure that peace prevailed before, during and after the election.

“The success of the forthcoming elections hinges on the collective responsibility of the police, the Electoral Commission, political parties, civil society organisations, the media and every Ghanaian. Let us unite to consolidate our democratic gains,” he said.

Mr Oppong-Boanuh also advised all police personnel to be impartial in discharging their duties before, during and after the elections.

The representatives of the political parties including Mr Collins Nuamah of the New Patriotic Party (NPP), Mr Samuel Ofosu-Ampofo of the National Democratic Congress (NDC), Mr Emmanuel Boamah of United Front Party (UFP), Ms Akua Donkor of the Ghana Freedom Party (GRP) and Dr Maxwell Awuku of the Ghana Union Movement (GUM) commended the police administration for the initiative and pledged to ensure that their activities were within the confines of the law.