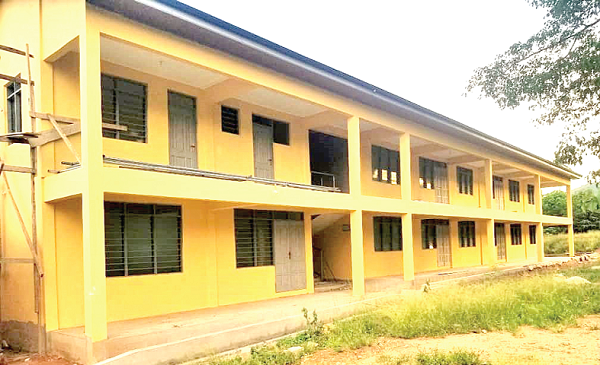 The National Democratic Congress (NDC) Member of Parliament (MP) for Ho Central, Benjamin Komla Kpodo, has supported the construction of a six-unit classroom block for the Tanyigbe-Anyigbe MA Junior High School in the Ho Municipality.

The GH¢710,000-classroom block project was constructed through financial support from the common fund of the MP for Ho Central and proceeds from his lobbying campaign for the project.

The new facility replaces the school’s dilapidated classroom block, which was built almost four decades ago.

Mr Kpodo told the Daily Graphic at Tanyigbe-Anyigbe last Sunday that the safety of the children was of paramount importance, and so when a rainstorm ripped off the roof of the old classroom block a few years ago, a decision was taken to replace it entirely with a new structure.

The new storey building was subsequently built, within two years.

This adds to the new kindergarten block, built for the school recently with the MP’s support.

“The emphasis is on education because it takes well-educated people to develop the community to great heights,” said Mr Kpodo.

Pursuant to that, he said, a reading exercise was organised for basic schools in the municipality in Ho recently, in collaboration with the municipal office of the Ghana Education Service (GES), as part of efforts to improve the children’s comprehension skills.

The MP gave an assurance that the exercise would be sustained to ensure high academic standards in basic schools in the municipality.

Further, he announced plans to set up a task force under a similar arrangement with the GES to organise regular mock examinations for junior high schoolchildren in the constituency, well ahead of their BECE papers.