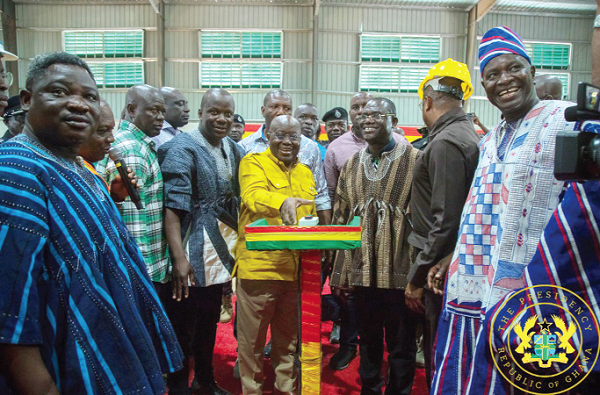 The $20-million plant is expected to employ technology to recycle organic, plastic and other waste into usable raw materials to feed agricultural and other industries.

Built by Zoomlion Ghana Limited, with its European partner, Komptech, in partnership with the government, the 400-tonne facility is one of the first 16 recycling and compost plants being constructed across all the regions in the country.

It also has the ability to recover waste materials that would have been landfilled and turned into raw materials for industry, which will go a long way to save the environment from pollution and the space needed to site new landfills.

Additionally, it will serve as a research and training centre for educational institutions, as students will be allowed to use the facility for internship, project work and attachment.

The commissioning of the plant, which took place yesterday, formed part of President Akufo-Addo’s two-day tour of the Savannah Region, which began the same day.

Commissioning the facility, the President said the project was in line with the government’s vision of addressing the problem of waste collection and its management to ensure a clean and safe living environment.

“One of the major problems our country has had is the issue of waste collection and disposal, but, fortunately, in my time, we have made partnerships to deal with the issue.

“It has been one of the highlights of my government — the partnership with the Jospong Group of Companies (JGC) to establish waste collection facilities, such as this one for Damongo,” he said.

The President expressed gratitude to the JGC for its contribution to the development of the country in the area of waste management.

The Chairman of the JGC, Dr Joseph Siaw Agyepong, said the plant would create about 500 direct jobs for the teeming youth of the area, while improving on the general sanitation situation.

He said the plant could process about 400 tonnes of solid waste, produce up to 200 tonnes of compost, as well as recover 56 tonnes of plastic waste daily in the Damongo municipality.