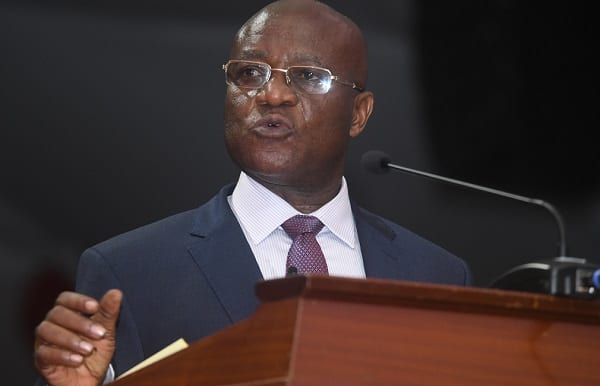 The Minister of Parliamentary Affairs, Mr Osei Kyei-Mensah-Bonsu, has appealed to Ghanaians to stop demanding money and other resources from politicians to help curb corruption among the political class.

He said requesting money from politicians especially during elections compelled them to use dubious means to recoup what they had spent to be elected as Members of Parliament or ministers of state.

Speaking at the Ministry of Parliamentary Affairs’ engagement with political parties in Accra yesterday, Mr Kyei-Mensah-Bonsu, said: “So, if a person is subjected to huge payments and the person gets elected, becomes a minister or deputy minister of state and contracts are awarded, what do you think will happen?”

“When you meet a person on the highway and you robbed him of all his possessions before allowing him entry into that city, you think that he is a father Christmas? He gets there and he will be looking to reimburse himself and restock his arsenal for the next battles ahead,” he said.

The meeting, which was held on the theme: “Monetisation of Politics in Ghana---A Focus on Solutions”, forms part of the ministry’s commitment to support other democracy-enhancing institutions and individuals to find lasting solutions to the excessive monetisation of politics in Ghana.

The participants examined the growing contribution of political parties to monetisation and the strategies that could be adopted to curb the canker, among others.

Mr Kyei-Mensah-Bonsu, who is also the Majority Leader in Parliament, urged political parties, especially the NPP and the NDC, to reform their constitutions to address what he described as the “hydra-headed monster of monetisation.”

He said the reforms must place less emphasis on selecting leaders and candidates via elections because elections induced corruption.

“Next year, our Constitution will be 30 years and I believe it is time we take action before our people lose faith in the political class,” he stated.

The Director of Research of the National Democratic Congress (NDC), Dr William Ahadzie, emphasised the need for the review of state funding for political parties to curb the influence of private individuals and corporate bodies on the funding of political campaigns.

That, he said he believed, would help reduce excessive monetisation and corruption in politics. He called for sanctions to be imposed on those who exhibited opulence during political campaigns.

The Director of Research of the National Development Party (NDP), Dr Samuel Mensah, expressed concern about the manner chiefs, the clergy and opinion leaders demanded money from political parties during electioneering.

The practice, he said, compelled politicians to do the “unthinkable at the end of the day.”

The General Secretary of All People’s Congress (APC), Mr Mordecai Thiombiano, blamed the Electoral Commission (EC) for the excessive monetisation in the country’s body politic, alleging that the practice where the EC raised filing fees had also contributed to the monetisation of electoral processes.

The General Secretary of the Great Consolidated Popular Party (GCPP), Mr Citizen Ato Dadzie, said since there were no sanctions against political opulence, many people engaged in dolling out money just to win political influence during elections.

“We should critically look at our laws that proscribe political monetisation,” he said.