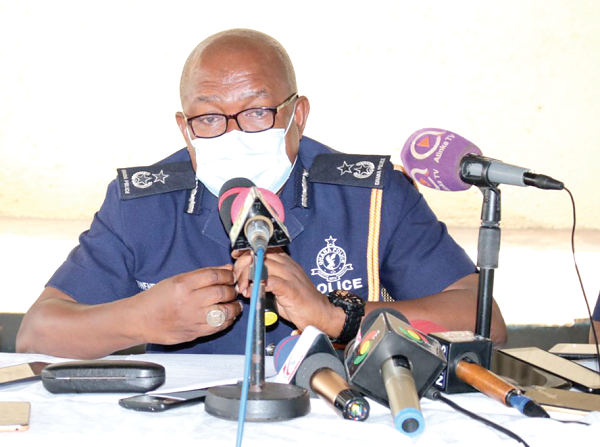 The Tema Regional Police Commander, Deputy Commissioner of Police (DCOP) Barima Tweneboah Sasraku II, has advised political parties to adhere to the provisions of the Public Order Act to ensure peace during campaigning towards the December general election.

He has, therefore, called on the leadership of all political parties to study and explain the Public Order Act, 1994 (Act 491) to their supporters to ensure a peaceful campaign ahead of the presidential and parliamentary elections on December 7, 2020.

Barima Sasraku II gave the advice at a meeting with executive members of some political parties in Tema last Tuesday.

Representatives of the New Patriotic Party (NPP), the National Democratic Congress (NDC) and the Convention People’s Party (CPP) and the media attended the meeting.

Also in attendance were the Tema Metropolitan Officer of the Electoral Commission (EC), Mr Manase Ofosuhene Asante, and his counterpart in charge of the Tema West Municipality, Mr John Nunoo.

He said the Act was enacted to ensure peace and order in the country and not to intimidate any political party or group of people.

Barima Sasraku II advised political parties to heed to venues and dates for their rallies to ensure peace during campaigning towards the December general election.

According to him, police recommendations for such variations were normally based on cogent reasons, including clash of proposed dates with similar events by opposing parties or important national exercises.

He assured the political parties of fairness and professionalism in the delivery of security and asked the various stakeholders to collaborate with the police and related security agencies to be deployed on election day to ensure a peaceful process.

He urged the political parties to engage in issue-based campaigns instead of embarking on activities which might potentially incite violence.

He also called on the EC to provide an enabling environment for all major stakeholders to engage more in the electoral processes to avoid suspicion on the part of critical stakeholders.

For his part, Mr Asante commended the police for organising the meeting and gave an assurance that the EC would discharge its duties with a high sense of professionalism.

Representatives of the political parties at the meeting took turns to share their expectations with the Tema Regional Police Command.

The Communications Officer of the NDC in the Tema East Constituency, Mr Alhassan Meisuna, bemoaned the destruction and defacing of party posters and flags by political parties.

He said the NDC had already lodged a complaint with the Community One Police and called on the Regional Police Command to act on the matter to avoid confrontation.

The representative of the NPP, Commodore Kweku Atta Bimpong (retd), urged the political parties to collaborate with the police and the EC in all the processes to avoid situations where there might be mistrust ahead of the polls.

Representatives of the media at the meeting entreated the Tema Regional Police Commander to sensitise its personnel to the role of the media in ensuring a peaceful election and also refrain from acts of brutality against media practitioners before, during and after the general election. - #GhanaVotes2020